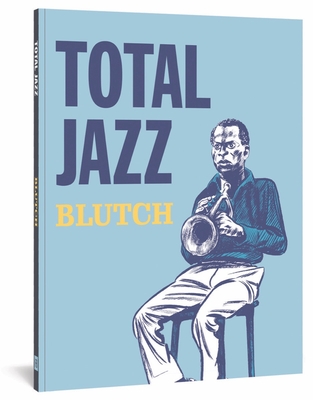 In this freewheeling collection of short stories and vignettes, the famed French cartoonist examines not only the music, but the nature of the jazz sub-culture. The grumpy festival goer, the curmudgeonly collector, and many other fan “types” are the targets of his unerring gimlet eye. Drawn in a range of styles as improvisational as Coltrane and Mingus — everything from loose linework to tight pen and ink to gestural pencils — Blutch captures the excitement of live performance, the lovelorn, and the Great Jazz Detective, who is out but not down.

Christian Hincker, better known by his pseudonym Blutch, is a French cartoonist who has been a prominent figure in European comics since the late 1980s. Known for his scratchy pen-and-pencil drawings and masterful storytelling, Blutch won the Grand Prix at Angouléme in 2009, and was the president of the 2010 Angouleme International Comics Festival.
Blutch’s work has tremendously inspired myself and an endless line of cartoonists, humbled by the virtuosity of his lush brushwork. It’s long overdue for his books to be translated into English.
— Craig Thompson - author of Blankets

Like listening to a great solo, Total Jazz washes over the reader and envelops them in Blutch’s graceful artistry.

Blutch's pieces are like a tornado confined to a bottle. They show a fairly wide variety of line work and approach, but they’re all animated by the same rambunctious, itchy spirit. Read this book!
— Paste

Altogether, Total Jazz is an essential book to add to your collection if you love jazz, but especially if you like music and the culture that surrounds it.

Blutch's work here is dedicated to finding the answer to what makes not just listening to jazz but finding yourself in it, dedicating yourself to it, obsessing over it, actually worthwhile — and finally getting lost in that connection between the music and the people who play it.
— The Comics Journal