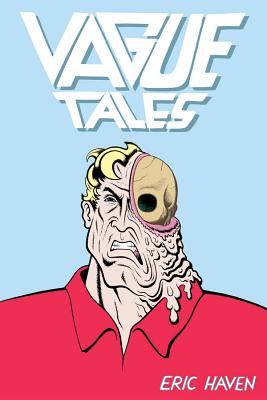 A man telepathically visits other worlds while sitting in his apartment in the first full-length graphic novel from the cult cartoonist.

A a solitary figure has telepathic encounters with a demonic aviatrix, a wandering crystalline being, a flaming sword-wielding warrior, and a mysterious sorceress, all within the confines of his own apartment. Haven’s work is dark, absurdist, and deadpan, reflecting the apocalyptic undercurrent of modern times. His inky, rubbery drawings buttress his black humor.

Eric Haven is an Emmy-nominated producer (Mythbusters) and Eisner Award-nominated cartoonist from Oakland, California. He has contributed to The Believer and Kramers Ergot.
Clunky, pugnacious, and colorful as golden age comics stalwart Fletcher Hanks, droll as single-panel virtuoso Glen Baxter, Haven is a comics parodist of the highest order.
— Booklist

Haven's stories are darkly absurd. His linework is beautifully bold and classically precise. And his stories are engagingly fantastic.
— Largehearted Boy