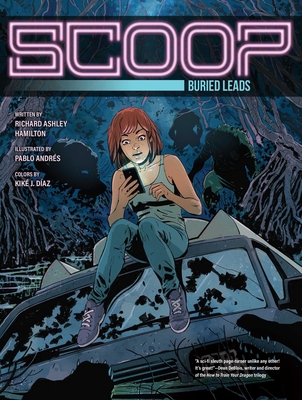 
Not On Our Shelves—Ships in 1-5 Days
“Heartfelt and adventurous — I love SCOOP!”
—AC Bradley, Executive Producer & Head Writer, Marvel’s What If?

When a hometown hero is charged with murder, teenage investigator Sophie Cooper dives into the investigation, balancing her internship, her upcoming quinceñera, and the drama of high school with the twisting, amazing case.

There is more to Miami teenager Sophie Cooper’s second major case as a teenage investigator/ journalist than meets the eye. In Scoop: Buried Leads, Sophie's newfound fame as an investigative reporter leads to her next case as a famous local chef is charged with the murder of his ex-wife. Despite overwhelming evidence, the hometown hero maintains his innocence and wants Sophie's help in finding the real killer. Can she pull it off, considering that she has to deal with her hectic internship at WMIA 7, planning her upcoming quinceñera, and the overwhelming drama of high school? As a new extraterrestrial presence in Florida’s everglades reveals ties to Sophie’s past, the case takes her in directions no one could have imagined.
Richard Ashley Hamilton is the award-winning screenwriter best known for his storytelling across DreamWorks’ How To Train Your Dragon, Trollhunters, and 3Below franchises. He wrote on the Daytime Emmy-winning first season of Dragons: Race to the Edge and the Lumiere award-winning How To Train Your Dragon: Hidden World Tour VR experience. But in his heart, Richard remains a lifelong comics fan and has written for Dark Horse Comics, DC, and more. Richard currently writes his YA graphic novel series, SCOOP, for Insight Comics.

Pablo Andrés is a comic book artist born in Argentina, known for his work on Dark Horse and Disney Comics, such as the Aladdin: Four Tales of Agrabah graphic novel.