College Sports on the Brink of Disaster: The Rise of Pay-for-Play and the Fall of the Scholar-Athlete (Hardcover) 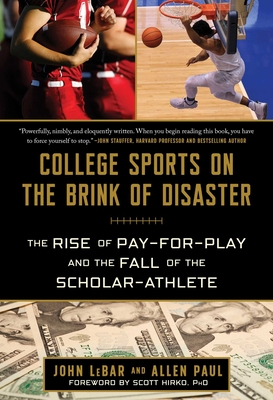 College Sports on the Brink of Disaster: The Rise of Pay-for-Play and the Fall of the Scholar-Athlete (Hardcover)


In Stock—Click for Locations
Impelled by runaway spending and rampant corruption, America's much-beloved games of college basketball and football are being threatened. The specter of billion-dollar sums being showered on coaches, voracious athletic directors, hordes of support staff and lavish comforts for fans has led to a near-deafening roar to pay the players. The injustice of such sums being amassed, in the main, from the labor of young men of color many of whom come from disadvantaged backgrounds cannot be justified; and yet, American society has allowed this intractable problem to fester for more than half a century. Lured by the glitter of untold riches, naive young players enroll year after year in colleges and universities expecting the ultimate reward of a highly paid career as a pro. Only a minuscule few will advance that far; even fewer will reap significant financial rewards. Instead of educating them, colleges and universities force them into full-time athletic jobs in which their labor is shamelessly exploited.

Small wonder that outraged critics demand compensation for the players, but these same critics only present vague answers when asked how such a radical change would work. College Sports on the Brink of Disaster, first published as Marching Toward Madness and now newly updated, cites twenty-one reasons why the pro-pay position is wrong, among them the  prospect that the player talent pool will be concentrated to even fewer rich schools; recruiting wars will lead to more frequent scandals; and the regulatory powers of the NCAA will exponentially increase. Worst of all, pay-for-play will encourage schools to shirk even further the imperative to educate the young athletes.

College Sports on the Brink of Disaster presents comprehensive reforms to end cheating and corruption in college sports, to put academics first, and to end the peonage of non-white athletes once and for all.
John LeBar earned his doctorate in education at Duke University, where he coached varsity tennis and later served as director of undergraduate studies.

Allen Paul earned a graduate degree in international politics from the School of Advanced International Studies at Johns Hopkins University. After college, he worked for the Associated Press and later as a speechwriter in Washington, DC.
"The authors present a powerful case for why fans, educators, administrators, college athletes and other stakeholders, stand at the edge of the precipice of losing the value and the promise of college sports as it was intended and could be. For those of us interested in preserving that value and realizing the potential of college sports' role in delivering authentic equality and equity in American society, this is a must-read." --Len Elmore, co-chair, Knight Commission; 10-year NBA veteran; 1974 All-American
"This book takes on the tough questions around college sports and provides a pathway to reform. It tells the story of inspirational scholar athletes, but it also reveals the exploding commercial underbelly of college sports. The book’s suggested solutions are worthy of our attention if America is to keep sports competition in perspective." --Tom McMillen—president, LEAD1 athletic directors, former Rhodes Scholar, 11-year NBA career, former member of Congress

"Frankly, this book is a gut check for Division I university presidents, especially serving at what is currently known as the Power 5 Conferences." --Dick Gould, coach of 17 National Championship tennis teams at Stanford

"Powerfully, nimbly, and eloquently written. When you begin reading this book, you have to force yourself to stop." -- John Stauffer—Harvard professor and bestselling author