The Baseball Maniac's Almanac: The Absolutely, Positively, and Without Question Greatest Book of Facts, Figures, and Astonishing Lists Ever Compiled (Paperback) 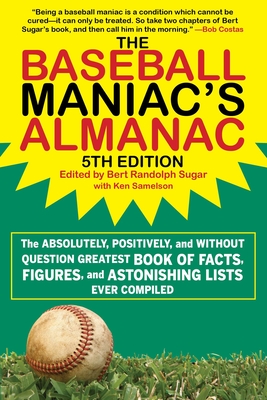 The Baseball Maniac's Almanac: The Absolutely, Positively, and Without Question Greatest Book of Facts, Figures, and Astonishing Lists Ever Compiled (Paperback)


Not On Our Shelves—Ships in 1-5 Days
Part reference, part trivia, part brain teaser, and absolutely the most unusual and thorough compendium of baseball stats and facts ever assembled—all verified for accuracy by the Baseball Hall of Fame.

First created by legendary sportswriter Bert Randolph Sugar, and now updated, here are thousands of fascinating lists, tables, data, and stimulating facts. Inside, you’ll find all of the big name baseball heroes like Babe Ruth, Ted Williams, Ernie Banks, Pete Rose, Denny McLain, Ty Cobb, and a lot of information that will be new to even the most devoted fans:

Not just a collection of facts or records, this is a book of glorious fun that will astound even the most bookish baseball fan. Read up and amaze your friends!
Bert Randolph Sugar established himself as one of the world's foremost sports historians. He was the former editor in chief of The Ring and Fight Game magazines and the author of more than eighty books, with over a dozen books on baseball. Past titles include The Ultimate Book of Boxing Lists, Bert Sugar’s Baseball Hall of Fame: A Living History of America's Greatest Game, and Fight or Die: The Vinny Paz Story. Sugar passed away in 2012.