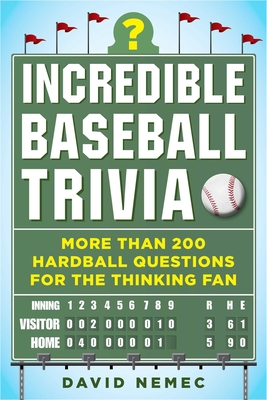 
Not On Our Shelves—Ships in 1-5 Days
Yankee fan? Red Sox fan? Dodger fan? Do you think you know everything about baseball from the Black Sox to the White Sox? Then test yourself . Every era of is represented from Cap Anson to Mike Trout, Cy Young to Clayton Kershaw, Ty Cobb to Jose Altuve, Babe Ruth to Giancarlo Stanton.

Match wits with the father of baseball trivia, David Nemec, a ten-time national champion as he presents more than 200 baseball stumpers that are artfully designed to test the depth of the reader’s knowledge about the game since 1871, including.