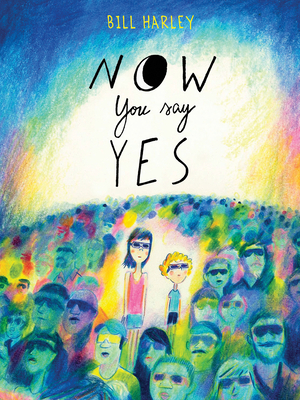 
In Stock—Click for Locations
Two recently orphaned siblings embark on an unforgettable cross-country road trip in search of their place in the world.

When her mother dies, fifteen-year-old Mari is now the only one who can care for her super-smart and exasperating, on-the-spectrum younger brother Conor. Desperate to avoid being split up or put back into the "System," Mari decides to set out in the old family Honda sedan to find their estranged grandmother, the only person in the world who might take them in.

Seizing upon Conor's obsession with the upcoming total eclipse of the sun, Mari convinces him to come along on a cross-country trajectory that will include a stop to view this spectacular event. As the two orphaned siblings journey from the snarls of LA traffic through the backroads of the Midwest and on toward their final destination in New England, Mari learns a lot about herself, about the world around them...and about their place in it.

Bill Harley, seasoned storyteller that he is, makes you laugh at one moment and then hits you with soul-wrenching sorrow the next. His spot-on narrative takes you straight into Mari's head and heart, where you experience her deep yearning to belong, her bewilderment as she tries to negotiate the complicated highway of life, and her tentative steps toward loving and trusting the people around her.
Bill Harley is a storyteller, songwriter, author, and playwright best known for his work with children and families. Considered by fans and peers alike to be one of the best storytellers in the country, his work is a celebration of commonality and humanity, delivered through comic narrative songs and confessional spoken pieces.

A prolific recording artist, Bill has produced thirty-five award-winning recordings, garnering two Grammy awards, numerous Parents' Choice awards, and recognition from the American Library Association and the National Parenting Association. Entertainment Weekly describes Harley as "the Mark Twain of contemporary kids’ music", Publishers Weekly says, "Harley's witty ebullient performance will have listeners laughing out loud", and the Washington Post describes Harley as "…a champion yarn-spinner and tunesmith with a sense of wonder, whimsy and mischief…" Visit him at www.billharley.com.


Bill not only traveled the same highways as Mari and Conor to write their story, but he also invented the fictitious girls' band that entertains them while they're on the road (and wrote all their songs!).

"A grand journey measured in both physical and emotional distance."—Kirkus Reviews

"As hopeful as it is heartbreaking, the novel Now You Say Yes follows a siblings' search for a place in the world."—Foreword Reviews

"A touching adventure where two siblings discover each other’s strengths and weaknesses, as well as their dreams and struggles. The plot shapes a realistic look at what hope can lead people to do; tweens will be cheering for Mari and Conor up to the very last page. . . .  This novel skillfully takes readers on the siblings’ emotional journey; themes of family and identity are peppered throughout and stand out thanks to Harley’s resonant prose and engaging storytelling."—School Library Journal