Countdown: 2979 Days to the Moon (Hardcover) 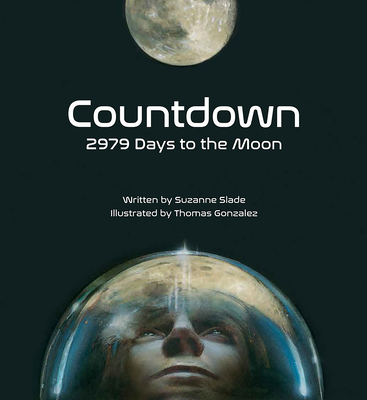 Countdown: 2979 Days to the Moon (Hardcover)


Special Order—Subject to Availability
The captivating true story of NASA's effort to land the first man on the Moon is told through powerful free verse and stunning illustrations.

Through triumph and tragedy, success and failure, an entire nation is glued to the high-stakes, 2,979-day mission as eighteen astronauts climb into spacecraft; three men die before even leaving the ground; eight rockets soar into space; and four hundred thousand people―engineers, technicians, scientists, mathematicians, and machinists―join Project Apollo in pursuit of making a dream a reality.
Suzanne Slade, a Sibert Honor-winning author, has written over one hundred and fifty children's books. An engineer by degree, she enjoys writing on STEM topics, as well as on inspiring figures in history. A popular speaker, she visits dozens of schools every year and has been invited to speak at numerous conferences such as ALA, IRA, ISLMA, NSTA, as well as the National Book Festival. Suzanne's books are enjoyed by readers around the world and also in space! Her picture book Astronaut Annie was read aboard the International Space Station for Story Time from Space. She lives in Illinois.

Thomas Gonzalez is an illustrator, designer, and portrait artist. A native of Cuba, he came to the United States when he was ten years old. He studied at the Atlanta School of Art (now called Savannah of Art and Design). After working at the Coca-Cola Company for more than twenty years, Tom held several creative positions with other global brands. He has illustrated many picture books, including the New York Times best-seller 14 Cows for America. He lives in Georgia.
★ "Stunning. . . Slade's carefully crafted, often alliterative text, written in free verse, is both succinct and readable, drawing this large topic down to the most necessary and interesting facts with enough detail to excite young teens as well as adults who may have lived through the missions.. . . Truly out of this world. A must-buy for most poetry collections." —School Library Journal, Starred Review

"[A] book that will captivate and entertain young readers while educating them about an amazing decade of U.S. space exploration. . . In the 21st century, space travel goals aim much further away than the moon, but Countdown drives home how truly incredible the Apollo missions are in the history of mankind." —Shelf Awareness

"A grand—if, so many years later, nostalgic—tale about a magnificent effort. A handsomely packaged look back at an epochal achievement."—Kirkus Reviews

★ "Elegant and informative, this is sure to attract casual browsers and true space nerds alike."—Booklist, Starred Review