Reflections on Captivity: A Tapestry of Stories by a Vietnam War POW (Hardcover) 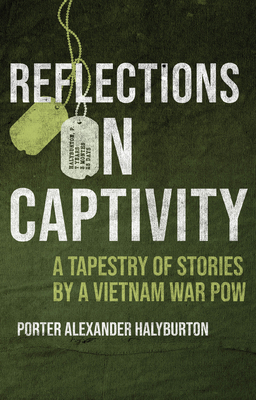 Reflections on Captivity: A Tapestry of Stories by a Vietnam War POW (Hardcover)

By Porter A. Halyburton

On October 17, 1965, Navy LTJG Porter Halyburton was shot down over North Vietnam on his 76th mission and listed as killed in action. One-and-a-half years later he was found to be alive and a prisoner of war. Halyburton was held captive for more than seven years. Reflections on Captivity, is a collection of fifty short stories about this young naval officer's experiences as a POW in North Vietnam.

​This book recounts difficult times but focuses more on the positive aspects I-the humor, creativity, friendships, courage, and leadership of an amazing group of Americans and how they helped each other survive and even thrive. These vignettes demonstrate how the human mind, body, and spirit can adapt and find meaning in life in the most challenging circumstances. There are powerful lessons learned from this complex experience that continue to guide the author's life to this day. Despite hardship, suffering, and long separation, Halyburton strongly believes one's quality of life is determined more by choices made than by circumstances, and the most liberating choice we can make is to forgive.

Reflections on Captivity furthers the reader's understanding about the nature of captivity, race relations, human relations, aspects of the air war against North Vietnam, and highlights the importance of leadership, ethics, and devotion to duty in difficult times.

Porter Halyburton spent twenty years on active duty in the U.S. Navy, retiring as a commander in 1984. He spent another twenty years on the faculty of the Naval War College, retiring as Professor of Strategy Emeritus in 2006. Among his many medals and awards, he received the Silver Star for "conspicuous gallantry and intrepidity" while interned. Porter is a potter, woodworker, poet, public speaker, and traveler. He still possesses the tombstone that his mother had placed in the family plot when he was declared KIA and says that he likes looking down on it rather than up from it. He and Marty, his wife of nearly sixty years, have three grown children and one grandson.