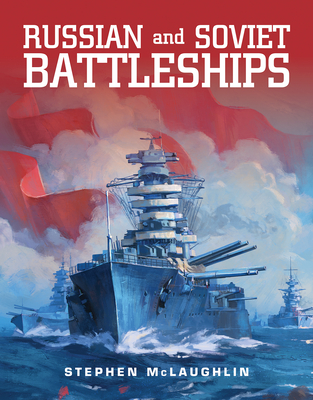 
Special Order—Subject to Availability
Russian and Soviet Battleships is the definitive English language overview of Russian and Soviet battleships, from the ironclad Petr Velikii of 1869 to Stalin's final projects. Meticulously researched, this work describes and illustrates the design histories, technical details, characteristics, and service histories of the forty seagoing battleships that served in the Russian and Soviet Navies. This is the first book about Russian battleships to draw from Russian language materials, including books and articles published since the collapse of the Soviet Union. Some one hundred drawings of ships and design studies, many specially commissioned for this book, are showcased, as well as one hundred photographs, many of them never published in the west. The author, Stephen McLaughlin, analyzes all aspects of battleship design, from the policy decisions behind their construction to details of fire control and gunnery. He evaluates their strengths and weaknesses compared with foreign contemporaries. In addition, McLaughlin outlines numerous projected battleships and conjectural studies. As he examines the active--and often tragic--careers of these ships, he reassesses many of the myths and misconceptions associated with Russian ships and the Russian navy.
Stephen McLaughlin has written numerous articles on naval history, and especially on Russian warships. He is the co-author of The Hybrid Warship (Naval Institute Press, 1991) with the late R.D. Layman, and completed the manuscript of Jutland: The Naval Staff Appreciation after the death of his friend William Schleihauf. McLaughlin worked as a librarian for the San Francisco Public Library for thirty-five years before retiring in 2017 and lives in Richmond, California.