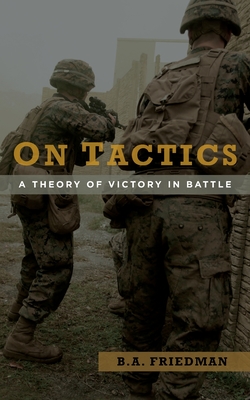 By B. A. Friedman


Not On Our Shelves—Ships in 1-5 Days
Originally setting out to write the very book that he would have wanted to own as a young infantryman, the author penned On Tactics as a remedy for navigating the chaotic and inchoate realm of tactical theory. Challenging centuries-old conventional wisdom regarding the principles of war, tactics, and the roles of strategy, doctrine, experiential learning, and military history, Friedman's work offers a striking synthesis of thinking on tactics as well as strategy. Part One of the book establishes a tactical system meant to replace the Principles of War checklist. First, the contextual role of tactics with regards to strategy and war will be established. This will necessarily lean on major strategic theories in order to illuminate the role of tactics. This section will be formed around the Physical, Mental, and Moral planes of battlefield interaction used by theorists such as J.F.C Fuller and John Boyd. Each plane will then be examined in turn, and many of the classic Principles of War will be discussed along with some new ones. It will present some standard methods that tacticians can use to gain an advantage on the battlefield using historical examples that illustrate each concept. These "tactical tenets" include maneuver, mass, firepower, tempo, surprise, deception, confusion, shock, and the role of the moral aspects of combat. Finally, Part One will circle back around by discussing the role of tactical victory- once achieved- in contributed to a strategy. Part One is short by design. It is intended to be both compelling and easily mastered for junior non-commissioned officers and company grade officers, while still rich enough to be interesting to both specialist and non-specialist academics. It is a book meant not just for bookshelves but also for ruck sacks and cargo pockets. Part Two builds on Part One by exploring concepts with which the tactician must be familiar with such as the culminating point of victory, mission tactics and decentralized command and control, offensive and defensive operations, and the initiative. Part Three will conclude the book examining implications of the presented tactical systems to a variety of other issues in strategic studies.
B. A. Friedman grew up in Cleveland, Ohio and entered the Marine Corps after graduating high school in 2000. He attended The Ohio State University and gained a B.A. in History as well as the Naval War College where he gained a M.A. in National Security and Strategic Studies. He transitioned to the Marine Corps Reserve in 2016 as a Captain.