The Mare and the Mouse: Stories of My Horses Vol. I (Hardcover) 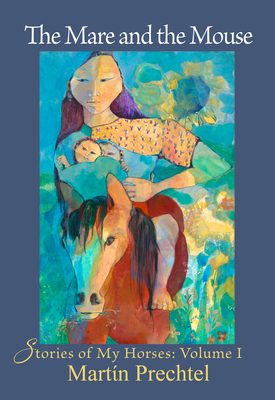 The Mare and the Mouse: Stories of My Horses Vol. I (Hardcover)


Not On Our Shelves—Ships in 1-5 Days
Beautiful and hilarious, tearful and rambunctious, very real, ironic and magic-filled, Martín Prechtel’s new book The Mare and the Mouse is a series of lyrical sagas in tribute to each of the native New Mexican horses that carried him through his youth on the Reservation and then again during the difficult times following his return home after over a decade in the Mayan Highlands of Guatemala. First in the Stories of My Horses Series, The Mare and the Mouse is meant to be read aloud to crowds around campfires, especially to people who are mistaken that only rich people or rednecks ride horses, Prechtel credits both his own physical and spiritual survival in “modernity’s mad rush to nowhere” with the sanity of riding and living with his natural-born Southwestern horses. Not raised for show, performance, status, or money, these little horses allowed a way of living that took him flying over ravines into deep-mountain Holy places, backwards over streams, and in general keeping alive a sparkier, older spirit in an age where horses have been grossly de-natured and sadly removed from our own everyday lives after three millennia as the closest companions of our ancestors’ dreams and mythologies.
A leading thinker, writer, and teacher in the search for the Indigenous Soul, Martín Prechtel is a dedicated student of eloquence, history, language, and an ongoing fresh approach. In his native New Mexico Martín teaches at his international school Bolad’s Kitchen: a hands-on historical and spiritual school of language, music, ritual, farming, smithing, architecture, clothing, tools, story, and humor to help people from many lands and backgrounds to remember and retain the majesty of their diverse origins while cultivating the flowering of integral culture to grow a time of hope beyond our own.