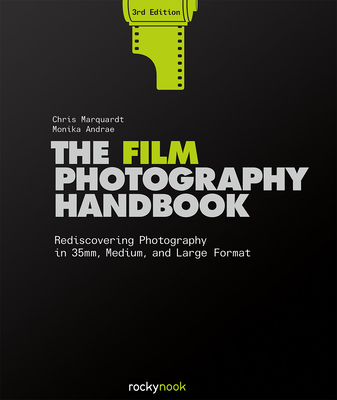 
Coming Soon—Pre-Order Now
Film photography has recently witnessed a significant renaissance--and not just among those who have previously shot with film. Interest in film photography and analog photography has also grown enormously among those who have only ever shot digitally. In The Film Photography Handbook, 3rd Edition, authors Chris Marquardt and Monika Andrae speak to both types of film photographers as they offer an easy-to-understand, complete resource to shooting film. In this updated and expanded edition, they address today's working climate, including such topics as the hybrid film/digital workflow, the digitization of negatives, and using smartphones for light metering and to assist in film processing.This book is intended for anyone who is curious about film and analog photography, whether you need a refresher course or are discovering this wonderful format for the first time. You'll learn how easy it is to shoot and process black-and-white film at home, and that just a little special equipment is needed to get into film photography.
You'll learn all about: - The important differences between film and digital photography- Numerous film cameras, as well as how to buy a secondhand camera - Film formats, from 35 mm to medium format and large format - Exposure settings, tonal values, and tonal representations in different types of film, from color negatives and slides to the enormous spectrum of black-and-white films- Processing film, covering everything you need to know: equipment, chemicals, and workflow- Scanning negatives to bring your analog photography into a digital workflow- Both presenting and archiving your prints and negativesWorking in such an "analog" medium requires a unique approach to photography, and it fosters a completely different form of creativity. Working in film and embracing analog photography can also prove to be a great inspiration for your own digital photography, as well. The Film Photography Handbook, 3rd Edition covers it all--from the technical to the creative--and will have you shooting film in no time, whether it's with an old rangefinder, an inexpensive Holga, or a medium-format Rolleiflex or Hasselblad.
Chris Marquardt is a photographic mythbuster and the host of Tips from the Top Floor, the world's longest running photography show. His photography podcasts have won multiple international awards. He has taught photography all over the planet, including Europe, Africa, North America, and Asia, where he has often accompanied photographers to the world's highest photography workshop at Mt. Everest base camp. Marquardt is a regular on Leo Laporte's Tech Guy radio show, which is syndicated across the United States and reaches an audience of millions.