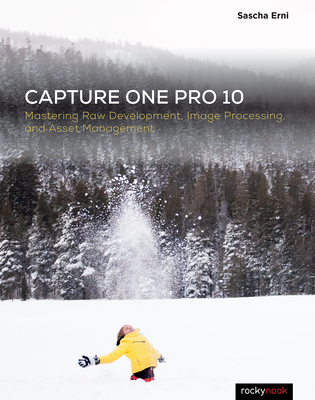 In Capture One Pro 10: Mastering RAW Development, Image Processing, and Asset Management, photographer Sascha Erni teaches readers everything they need to know in order to quickly get up and running with Capture One Pro.

Historically, Capture One Pro software has been regarded primarily as an amazing RAW file converter for high-end cameras. With its newest release, Capture One Pro 10 goes well beyond its storied RAW conversions to become one of the most powerful image-processing applications on the market, addressing the imaging workflow from capture to print. Version 10 has also been optimized to support many of the most popular cameras being used today.

With an abundance of new features and the promise of producing vastly superior images, photographers of all skill levels are giving Capture One Pro a try. Of course, along with expanded functionality and improved performance, the software has become a challenge to learn efficiently on one's own. Users need a helping hand in order to get up to speed and make sure they are taking full advantage of this powerful software.

In Capture One Pro 10: Mastering RAW Development, Image Processing, and Asset Management, photographer Sascha Erni teaches readers everything they need to know in order to quickly get up and running with Capture One Pro. He also dives deeply into its extensive feature list to allow users to fully explore the capabilities of the software.

Whether you're moving to Capture One Pro from Aperture or Lightroom, or just beginning to learn image-editing with Capture One Pro 10, this book will teach you how to get amazing results while avoiding frustration and wasted time along the way.

Sascha Erni is a freelance photojournalist and reporter. Since 2004, he has contributed images and stories to many popular agencies, newspapers, and magazines around the world. He authored his first non-fiction book, Mac and iPad for Photographers, in 2014. In his spare time, he writes fiction and practices fine art photography. Erni is a member of the Phase One Ambassador Program, which keeps him on the cutting edge of Capture One development. Erni lives, photographs, and writes in Switzerland.