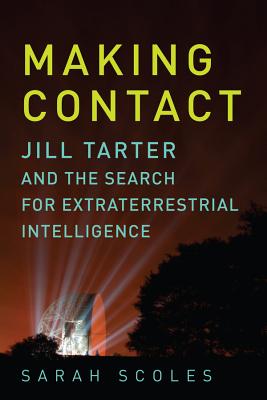 For anyone who has ever looked up at the night sky and wondered, "Are we alone?"  A brilliant examination of the science behind the search for extraterrestrial intelligence and its pioneer, Jill Tarter, the inspiration for the main character in Carl Sagan's Contact.

Jill Tarter is a pioneer, an innovator, an adventurer, and a controversial force. At a time when women weren’t encouraged to do much outside the home, Tarter ventured as far out as she could—into the three-Kelvin cold of deep space. And she hasn’t stopped investigating a subject that takes and takes without giving much back.

Today, her computer's screensaver is just the text “SO…ARE WE ALONE?” This question keeps her up at night. In some ways, this is the question that keep us all up at night. We have all spent dark hours wondering about our place in it all, pondering our "aloneness," both terrestrial and cosmic. Tarter’s life and her work are not just a quest to understand life in the universe: they are a quest to understand our lives within the universe. No one has told that story, her story, until now.

It all began with gazing into the night sky. All those stars were just distant suns—were any of them someone else's sun? Diving into the science, philosophy, and politics of SETI—searching for extraterrestrial intelligence—Sarah Scoles reveals the fascinating figure at the center of the final frontier of scientific investigation. This is the perfect book for anyone who has ever looked up at the night sky and wondered if we are alone in the universe.

Sarah Scoles is a science writer whose work has appeared in The Atlantic, Slate, Smithsonian, The Washington Post, Scientific American, Popular Science, Discover, New Scientist, Aeon, and Wired. A former editor at Astronomy magazine, Scoles worked at the National Radio Astronomy Observatory, the location of the first-ever SETI project. She lives in Denver, Colorado.
Scoles’s conversational style and cultural references will appeal to the readers of Wired magazine. Tarter emerges as both heroic and all too human. To paraphrase the poet Robert Browning, humanity’s reach must exceed its grasp, or what are the heavens for?

Scoles shares the fantastic story of people willing to pursue a quixotic goal in the face of daunting odds.

An admiring, insightful biography. Scoles has done her homework, so readers will both understand and sympathize with Tarter, who has become an icon and role model despite pursuing a goal she knows she will never achieve.

Scoles—who has clear affection for her subject—highlights Tarter’s tenacity. A detailed portrait of how the science sausage gets made.

Scoles’s biography deftly and entertainingly tells the story of groundbreaking scientist Jill Tarter, whose work has been pivotal to SETI. Making Contact astutely highlights the nuances and challenges of being a female scientist at the time, a heroic achievement in itself. Tarter's story reminds us to keep pursuing answers to pivotal scientific questions, regardless of the ideological barriers.