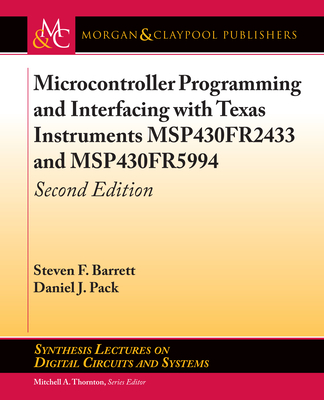 This book provides a thorough introduction to the Texas Instruments MSP430(TM) microcontroller.

The MSP430 is a 16-bit reduced instruction set (RISC) processor that features ultra-low power consumption and integrated digital and analog hardware. Variants of the MSP430 microcontroller have been in production since 1993. This provides for a host of MSP430 products including evaluation boards, compilers, software examples, and documentation. A thorough introduction to the MSP430 line of microcontrollers, programming techniques, and interface concepts are provided along with considerable tutorial information with many illustrated examples. Each chapter provides laboratory exercises to apply what has been presented in the chapter. The book is intended for an upper level undergraduate course in microcontrollers or mechatronics but may also be used as a reference for capstone design projects. Also, practicing engineers already familiar with another microcontroller, who require a quick tutorial on the microcontroller, will find this book very useful. This second edition introduces the MSP-EXP430FR5994 and the MSP430-EXP430FR2433 LaunchPads. Both LaunchPads are equipped with a variety of peripherals and Ferroelectric Random Access Memory (FRAM). FRAM is a nonvolatile, low-power memory with functionality similar to flash memory.

Steven F. Barrett, Ph.D., P.E., received a B.S. in Electronic Engineering Technology from the University of Nebraska at Omaha in 1979, an M.E.E.E. from the University of Idaho at Moscow in 1986, and a Ph.D. from The University of Texas at Austin in 1993. He was formally an active duty faculty member at the United States Air Force Academy, Colorado and is now the Associate Dean of Academic Programs at the University of Wyoming. He is a member of IEEE (senior) and Tau Beta Pi (chief faculty advisor). His research interests include digital and analog image processing, computer-assisted laser surgery, and embedded controller systems. He is a registered Professional Engineer in Wyoming and Colorado. He co-wrote with Dr. Daniel Pack several textbooks on microcontrollers and embedded systems. In 2004, Barrett was named "Wyoming Professor of the Year" by the Carnegie Foundation for the Advancement of Teaching and in 2008 was the recipient of the National Society of Professional Engineers (NSPE) in Higher Education, Engineering Education Excellence Award.