All Your Racial Problems Will Soon End: The Cartoons of Charles Johnson (Hardcover) 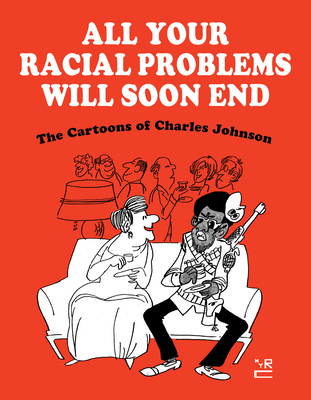 All Your Racial Problems Will Soon End: The Cartoons of Charles Johnson (Hardcover)


On Our Shelves Now at:
Years before he wrote his National Book Award–winning novel Middle Passage, Charles Johnson created these sidesplitting and subversive gag comics about Black life in America, now collected for the first time in nearly half a century.

Before Charles Johnson found fame as a novelist and won the National Book Award for Middle Passage in 1991, he was a cartoonist, and a very good one. Taught via correspondence course by the comics editor Lawrence Lariar, mentored by the New Yorker cartoonist Charles Barsotti, and inspired by the call of the poet Amiri Baraka to celebrate and depict Black life in America, Johnson crafted some of the fiercest and funniest cartoons of the twentieth century.

This collection, Johnson’s first in nearly fifty years, brings together work from across his career: college newspaper gags, selections from his books Black Humor and Half-Past Nation Time, his unpublished manuscript Lumps in the Melting Pot, and uncollected pieces. Taken together, this volume reveals Johnson as long overdue for appreciation as a cartoonist of the first order.
Charles Johnson is a novelist, essayist, literary scholar, philosopher, cartoonist, screenwriter, and professor emeritus at the University of Washington in Seattle. A MacArthur Fellow, he won the National Book Award for his novel Middle Passage in 1990. He is one of the artists and contributors featured in It’s Life as I See It: Black Cartoonists in Chicago, 1940–1980, published by New York Review Comics.
"The first collection of his comics in more than 50 years, All Your Racial Problems Will Soon End – which takes its title from one of his ever-caustic captions – invites the reader to roll their eyes at society’s absurdities and ponder what’s changed since the ’70s. Some of his comics memorialize a long-past cultural moment, while others remain glaringly relevant. All feature his characteristic sharp wit and supple line." —Etelka Lehoczky, Books We Love 2022, NPR

"The cartoons are blunt, in-your-face, and, often, still funny-and-fresh lampoons of racial mores and manners. . . .these crafty single-panel drawings resonate with rueful nostalgia, roughhousing wit, and. . .some eerie convergences with present-day turmoil. . . . An illuminating, warmhearted souvenir of a tumultuous era." —Kirkus Review

"Johnson has maintained his visual creativity, pushing limits, inspiring and illuminating with sly humor and biting insight. . . .The brilliant cartoon which inspired the title is shocking genius, sure to elicit uncomfortable, unavoidable laughter . . . exactly what this collection should do for lucky readers." —Terry Hong, Booklist starred review