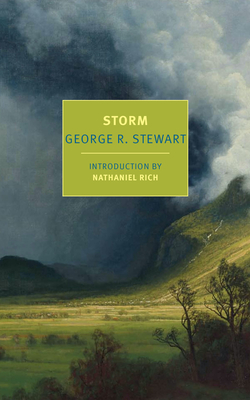 
In Stock—Click for Locations
A thrilling, innovative novel about the interplay between nature and humankind by the author of Names on the Land.

With Storm, first published in 1941, George R. Stewart invented a new genre of fiction: the eco-novel. California has been plunged into drought throughout the summer and fall when a ship reports an unusual barometric reading from the far western Pacific. In San Francisco, a junior meteorologist in the Weather Bureau takes note of the anomaly and plots “an incipient little whorl” on the weather map, a developing storm, he suspects, that he privately dubs Maria. Stewart’s novel tracks Maria’s progress to and beyond the shores of the United States through the eyes of meteorologists, linemen, snowplow operators, a general, a couple of decamping lovebirds, and an unlucky owl, and the storm, surging and ebbing, will bring long-needed rain, flooded roads, deep snows, accidents, and death. Storm is an epic account of humanity’s relationship to and dependence on the natural world.
George R. Stewart (1895–1980) was born in Pennsylvania and educated at Princeton. He received his PhD in English literature from Columbia in 1922 and joined the English faculty at the University of California, Berkeley, in 1924. He was a sociologist, toponymist, and founding member of the American Name Society, and the author of more than twenty books, including the highly successful novel Earth Abides and several works of American history. In addition to Storm, NYRB Classics publishes his study of American place names, Names on the Land.

Nathaniel Rich is the author of Second Nature; Losing Earth, a finalist for the PEN/E. O. Wilson Literary Science Award and a winner of awards from the Society of Environmental Journalists and the American Institute of Physicists; and the novels King Zeno, Odds Against Tomorrow, and The Mayor’s Tongue.
“Man versus nature, and the ability of humans to cope under environmental stress, are Stewart’s two obsessions. He is at once a chronicler of the achievements and architectures of modern civilization and an ecological fatalist. . . . In Storm, he went so far as to write what he called a biography of the weather.” —Christine Smallwood, The Nation

“Weather is here for the first time given the importance in fiction that it has in fact. . . . It is impossible to forget, anywhere in the novel, the impending weight of that mighty movement of the air. . . . Stewart with admirable ingenuity and sure craftsmanship has let us look for a moment at the mortar that holds a civilization together. A good many of his readers will never again . . . note a cloud without remembering at least momentarily that the air, not the earth, is our mortal home.” —Wallace Stegner, The Boston Globe

“[Stewart] presents meteorological detail with obsessive care, although not without wry humor. . . . By looking down on society from the height of a tempest, [Storm] frames all human and animal lives—earnest and ignorant, shaped by forces they forget to consider—as being on the same side as they strive for meaning and survival.” —Blair Braverman, The New York Times Book Review

“The storm itself . . . becomes absorbing as few human characters, in fiction, ever are. It is a splendid job of research and design.” —Time

“Storm is considered the first of its kind, paving the way for an entire genre of fiction, the eco-novel. Fans of The Overstory will be transfixed with this reissue, which follows the storm every day of its existence as we would a volatile and dramatic character, and leaves us with a renewed awareness of the interconnectedness of our mysterious and awe-inspiring world.” —Julia Hass, Lit Hub

“[Storm’s] very structure is anti-anthropocentric. Unfolding over twelve chapters, each corresponding to a different day, the novel proceeds mosaic-like. . . . Everything, both manmade and natural, is connected in Storm’s ecosystem; everything that happens has wide-ranging consequences, the butterfly effect in full force.” —Andrew Schenker, The Baffler

“Unlike anything else out there.” —Stuart Miller, The Orange County Register

“Viewed through the prisms of climatological, geological, and evolutionary processes, humans are more or less interchangeable, their parochial concerns necessarily banal. This is what Stewart’s work conveys at its best: a sense of humility and an appreciation of the contingent status of our own species, endlessly threatened as it is by a relentless, hostile nature. . . Stewart’s body of work feels proleptically tailored to an era of catastrophic ecological decline. . . . Storm is a dense web of accidents, a vast orchestral work in which each moving part bespeaks an organic relationship to the whole.” —Matthew Sherrill, Harper’s