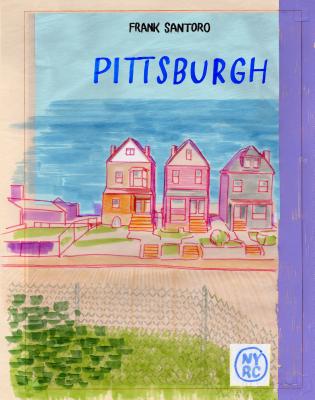 
Special Order—Subject to Availability
A moving graphic memoir about home, childhood, and family by the author of Storeyville and Pompeii.


Pittsburgh is the story of a family, and a city. Frank Santoro faces a straightforward yet heart-rending reality: His parents, once high-school sweethearts, now never speak to each other—despite working in the same building. Stuck in the middle, he tries to understand. The result is this book.

Using markers, pencils, scissors, and tape, with a variety of papers, drawing in vivid colors and exuberant lines, Santoro constructs a multi-generational retelling of their lives. Framed by his parents’ courtship and marriage, and set amid the vital but fading neighborhood streets, the pages of Pittsburgh are filled with details both quotidian and dramatic—from his childhood mishaps to his father’s trauma in Vietnam—interspersed throughout with the mute witness of the family dog, Pretzel.

Santoro, the acclaimed author of Storeyville and Pompeii, has created his masterpiece. Pittsburgh is an extraordinary reimagining of the comics form to depict the processes of memory, and a powerful, searching account of a family taking shape, falling apart, and struggling to reinvent itself, as the city around them does the same.
Frank Santoro’s work has been exhibited at the American Academy of Arts and Letters in New York City and at the National Archaeological Museum of Naples, Italy. He is the author of Storeyville and has collaborated with Ben Jones, Dash Shaw, Gary Panter, and others. He lives in Pittsburgh, Pennsylvania.
Shortlisted for the 2020 Cartoonist Studio Prize, presented by The Center for Cartoon Studies and Slate

"Santoro’s stupendously assured style is made to seem sketchy, preliminary, transient. . . . Santoro’s pans around the industrial vistas and timeless rivers are majestic as well as melancholy. . . . There are stories yet to end, and futures of uncertainty ahead. But art like Pittsburgh makes the world worth staying in.” —Adam McGovern, HiLobrow

“Examining his mother and father’s broken relationship, Santoro (Pompeii) expands their story into a superb combination of family saga, coming-of-age memoir, and tribute to his hometown of Pittsburgh . . . He simultaneously pays tribute and bears witness in artful detail, creating an origin story sure to move many readers to reflect upon their own beginnings.” —Publishers Weekly, starred review