Friend of My Youth (Paperback) 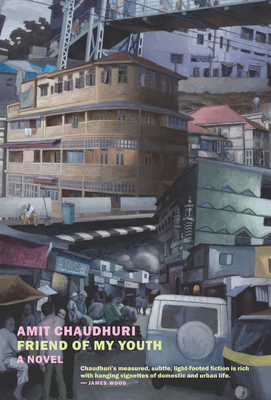 Friend of My Youth (Paperback)


Backordered
An intensely personal novel about childhood, memory, and history by one of today's most celebrated authors, now available in the US for the first time.


Friend of My Youth begins with the novelist Amit Chaudhuri returning to Bombay, the city in which he grew up, to give a reading. Ramu, the friend of his youth, with whom he likes to get together when he comes back, is not there: after years of disabling drug addiction, Ramu has signed up for an intensive rehab program. But Amit Chaudhuri has errands to run in Bombay for his mother and wife, which take him back to the Taj Mahal Hotel, the site, not that long before, of a brutal terrorist attack.

Amit Chaudhuri writes novels the way an extraordinary instrumentalist makes music, stating and restating his themes, trying them out in different keys and to various effect, developing and dropping them, only to pick them up again and turn them completely around. He engages both our minds and our hearts. He makes us marvel. Friend of My Youth, his deceptively casual and continually observant and inventive new novel, makes us see and feel the great city of Bombay while bringing us into the quizzical, tender, rueful, and reflective sensibility of its central character, Amit Chaudhuri, not to be confused, we are told, with the novelist who wrote this book. Friend of My Youth reflects on the nature of identity, the passage of time, the experience of friendship, the indignities of youth and middle age, the lives of parents and children, and, for all the humor that seasons its pages, terror, the terror that can strike from nowhere, the terror that is a fact of daily life. Friend of My Youth is fearfully and wonderfully made.
Amit Chaudhuri is a novelist, essayist, poet, and musician. A fellow of the Royal Society of Literature, he lives in Calcutta and the United Kingdom, where he is a professor of contemporary literature at the University of East Anglia. Friend of My Youth is his seventh novel. Among Chaudhuri’s other works are three books of essays, the most recent of which is The Origins of Dislike; a study of D. H. Lawrence’s poetry; a book of short stories, Real Time; a work of nonfiction, Calcutta: Two Years in the City; and two volumes of poetry, including Sweet Shop. He has made several recordings of Indian classical and experimental music, and the awards he has received for his fiction include the Commonwealth Writers’ Prize, the Los Angeles Times Book Prize for Fiction, and the Indian government’s Sahitya Akademi Award.
"Chaudhuri’s measured, subtle, light-footed fiction is rich with hanging vignettes of domestic and urban life." —James Wood

"Amit Chaudhuri’s Friend of My Youth offers a thoughtfully meta exploration of the passage of time, the multiplicity of selves, and the way in which writing and place can connect the two." —Shelf Awareness

"With the publication of Friend of My Youth, Amit Chaudhuri is now the author of seven novels, greatly admired, especially by his peers . . . the drama of the self, spun from Chaudhuri’s meditations and recollections, is artfully composed and utterly absorbing." —Kate Webb, The Times Literary Supplement

"In this elusive, evocative fiction, a novelist's visit to his boyhood hometown of Bombay calls up memories of a longtime friend and a recent terrorist episode. . . . Anything but a conventional novel, its pleasures arise from a craftsman's writing and its subtle demands and rewards." —Kirkus, starred review

"A mini masterpiece. A really beautiful book. I love his honest, unsparing descriptions of himself, his weird, off-beat, unapologetic persona." —Financial Times, Everything Else podcast

“To paraphrase a title of Proust’s, a writer Chaudhuri has been compared to often, this is a remarkable record of pasts recaptured that had never been free in the first place.” —Michael Autrey, Booklist

"In this cogent and introspective novel, Chaudhuri movingly portrays how other people can allow individuals to connect their present and past." —Publishers Weekly

“What [Chaudhuri] does in this short novel, with exquisite delicacy, is show disconnection, vacancy and the physical world’s imperviousness to human action, even of the most violent kind.” —Esquire (UK)

“Friend of My Youth is a taut, efficient book: part novel and part manifesto. It presents itself as a work of fiction about friendship, the experiences of youth and the city of Mumbai, but really it’s a kind of anti-novel: a book about the failures of fiction to account for the realities of memory.” —The Guardian

“Chaudhuri is an exceptionally subtle writer, a skeptical seeker rather than a postmodern show-off. However you classify it, this journey through the traces of his past earns its literary sleight-of-hand. . . . In a book that (in a good sense) marks time, the narrator prepares for his next ‘leap of life’. Like Benjamin’s Angel of History, which Chaudhuri does credit, these elegiac ruminations look backwards but move forwards.” —The Spectator

“This novel is ‘an assemblage of moments, of different kinds of awareness of the world, and even of writing.’ Like [Henry] Green’s novels it offers delight, it shimmers, you seek to catch hold of it and it slides away.” —The Scotsman

"[The narrator] remains unmoved by the memories Bombay evokes yet experiences an unsettling homesickness, a paradoxical state that is compellingly observed. He also likes to eat: miniaturist descriptions of the evolving food landscape are pin-sharp. The autofictional riffs are unshowy, often funny, and it all comes together as a textured reflection on the hold of the past." —Francesca Angelini, Sunday Times

“Fiercely intelligent . . . elegant. [Chaudhuri] combines a serious reflection on psychology and friendship with an examination of the artist’s relationship to real life.” —The Herald

“What [Chaudhuri’s] work exemplifies is somebody who views the canon as everything, that there isn’t a form of canonical literature that makes him cleave to one culture or the other.” —Will Self

“I realized that I had no terms in my critical lexicon to communicate the delight and the pleasure that his writing had given me. I haven’t encountered such joyous and playful writing about walking or eating . . . as I have in Chaudhuri’s books.” —Sumana Roy, Los Angeles Review of Books

“Amit Chaudhuri is a master. This book is a hymn to our present and our past. In today’s noisy world, Chaudhuri’s words provide a home wherein we can contemplate the essential things in life.” —Nadeem Aslam

"What a beautifully lyrical composition. I love how it is pitched three-quarters of the way to fiction, but with an eloquent nod towards “real life”. In this sense, it possesses the fantasy of fiction, but the grit of the lived and experienced. It's an achievement." —Caryl Phillips

"Reading Friend of My Youth was very calming. A sort of relief. It re-arranged the nervous system: the sentences and paragraphs were in step with breath, with thought, with strolling; time is slowed down. I would not describe Amit as a miniaturist—although his books are short—no, he is an epic writer—his protagonists have made long journeys." —Deborah Levy

"Friend of my Youth is a mesmerizing book. I started it early one afternoon in Italy, out of a simple desire to dwell in the 1980s, and then found myself restless outside its force field… and was relieved to return to it. The book has many pleasures to offer, especially those of recognition (it's always nice to see Chunky Pandey being resurrected). And though at first its meditations on the nature of the self and memory seemed to resemble those found within the tradition of European modernism, I began to think as I read on, and became convinced by the end of the book, that more than anything by Proust, Gide, and Woolf, it comes close to illustrating the Buddhist theory of dependent origination." —Pankaj Mishra

"In my opinion, his most interesting book, entirely free of the anxiety of influence." —Jeet Thayil, Books of the Year, Scroll.in

"A mini masterpiece… He doesn’t really follow the conventions of what we think of as a novel, but is… pushing and stretching at those boundaries . . . I love his honest, unsparing descriptions of himself, his weird, off-beat, unapologetic persona . . . a really beautiful book." —Financial Times Culture Podcast

"I have read nothing like it . . . it has changed the novel . . . I can’t recommend it highly enough." —Georgina Godwin, Monocle Radio