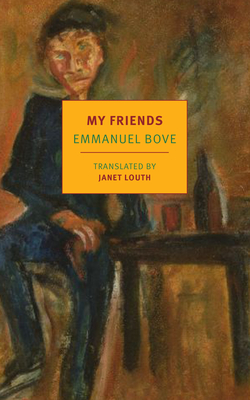 
Special Order—Subject to Availability
Bove's tale of a World War I veteran living in postwar Paris, searching for friendship and warmth, is an ironic, entertaining masterpiece by one of France's favorite authors.

My Friends is Emmanuel Bove’s first and most famous book, and it begins simply, though unusually, enough: “When I wake up, my mouth is open. My teeth are furry: it would be better to brush them in the evening, but I am never brave enough.” Victor Baton is speaking, and he is a classic little man, of no talent or distinction or importance and with no illusions that he has any of those things, either; in fact, if he is exceptional, it is that life’s most basic transactions seem to confound him more than they do the rest of us. All Victor wants is to be loved, all he wants is a friend, and as he strays through the streets of Paris in search of love or friendship or some fleeting connection, we laugh both at Victor’s meekness and at his odd pride, but we feel with him, too. Victor is after all a kind of everyman, the indomitable knight of human fragility. And, in spite of everything, he, or at least his creator, is some kind of genius, investing the back streets and rented rooms of the city and the unsorted moments of daily life with a weird and unforgettable clarity.
Emmanuel Bove (1898–1945) was a French journalist and novelist. He had been publishing popular novels under the pseudonym Jean Vallois for several years when Colette helped him publish My Friends under his own name. He continued publishing successful novels until World War II, at which time he was forced into exile in Algeria. He died of heart failure soon after returning to Paris from exile.

Janet Louth has translated several books by Emmanuel Bove, including My Friends, Armand, and A Man Who Knows. She lives in Manchester, England.
“Slim, dismal, hilarious.” —Sheila Heti, Bookforum

“Bove is the Proust of the other end of the bourgeoisie.” —Keith Botsford

“An ironic, beautifully understated and entertaining early existentialist novel.... Contemporary readers will find Bove’s world, of postwar Paris, fascinating and entertaining, and his skill in rendering it impressive.” —Kirkus Reviews

“[Bove’s] first novel is as buoyant as fresh bread. It is also sad, funny and engagingly written in short, sober sentences which seem to flow with the ease of everyday talk. Beneath this appearance, to be sure, lies the art which conceals art, for Emmanuel Bove’s style is thriftily pared down and his choice of detail cleverly persuasive. The surprise is not in learning that his books appealed in their time to Colette, Rainer Maria Rilke and Samuel Beckett, but rather that they should have sunk since then into near oblivion.” —Julia O’Faolain, Los Angeles Times