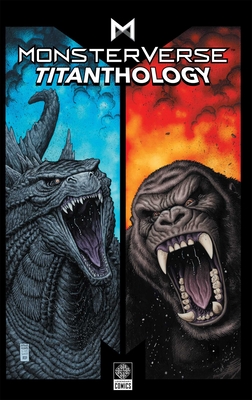 
Special Order—Subject to Availability
For new readers wanting to discover the backstories of Godzilla and Kong for the first time or fans revisiting their favorite adventures, the Monsterverse Titanthology Vol 1 brings the previously released graphic novels, Skull Island: The Birth of Kong (2017) and Godzilla: Aftershock (2019), together in one legendary volume for the first time ever.

With a new cover by Arthur Adams and never-seen sketches and art, this collection is a must-have for all Godzilla and Kong fans.

Before their epic clash in Godzilla vs. Kong, learn the secrets and mysteries of Kong and Godzilla in this Titanic collection.

In Godzilla: Aftershock, the King of the Monsters becomes an endangered species as an ancient terror rises from the depths of the Earth that will test Godzilla like never before. A shadowy figure stalks Dr. Emma Russell as she travels the globe with a team of Monarch operatives to unearth clues of an ancient terror returning to threaten humanity, while Godzilla clashes in a rivalry as old as the Earth itself.

In Skull Island: Birth of Kong, discover the secrets of Kong's mythic origins as the cryptozoological adventurers of Monarch return to the birthplace of one of our world's greatest wonders. As a journey of discovery becomes a desperate escape mission, a team of operatives fights to survive the hidden dangers of the island - and each other.

Arvid Nelson was raised by a pack of wild Nintendo cartridges in the wilderness of southern Connecticut. He worked on several films before deciding to focus on graphic novels. Since then he's written over a dozen titles, including two original series - Rex Mundi, set in 1930s Europe where magic is real and the Catholic Church never lost its grip on power, and Zero Killer, an "alternate present" where the United States never dropped Atom bombs on Japan. He's worked for DC Comics, Marvel Comics, and Dark Horse Comics, to name a few.

Arvid lived in Northampton, Massachusetts with a loving wife, a wonderful son, and a large television. Visit him online at arvidland.com.

Nominated at #8 in 10 Comic Book Creators To Watch in 2013 on Newsarama.com (www.newsarama.com/15655-10-to-watch-in-2013-comic-book-creators.html#s4) for his maiden project with Robert Napton, his career with Legendary Comics began with Trick ‘r Treat: Monster Mash late 2015. This work relationship continues with the digital graphic novel prequel to the Netflix movie Spectral: Ghosts of War in 2016, and his biggest responsibility yet, Skull Island: The Birth of Kong in 2017.


After a change of terrain with Lost in Space: Countdown to Danger, he is returning to Skull Island for [Kong 2 - to replace with the Kong prequel comic title?].

In his free time, (which is not a lot) you can see him updating his social media accounts with his slice of life comic as a work-from-home dad under the hashtag #DOAWFHD

Drew’s contributions to Legendary Comics’ Monsterverse include illustrating GODZILLA: DOMINION, GODZILLA: AFTERSHOCK, the official graphic novel prequel to GODZILLA: KING OF THE MONSTERS, and cover art on the final issue of the KONG: SKULL ISLAND series.