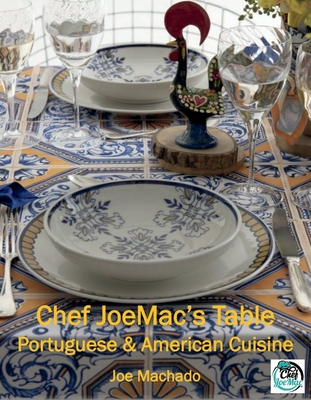 
Backordered
Cooking featuring traditional Portuguese favorites and classic American cuisine
My story begins in a little town called Fontinhas (Little Springs). Our family history goes back to the late 1100's, as our family immigrated to the Island of Terceira in the Azores from Portugal's Northern East Region of Bragança. Our family name was traced back to 1147, however, the name dates back to the 2nd century in the Iberian Peninsula. The name Machado, translates in English to 'Axe' or 'Hatchet'.
On the island, our family were basically farmers. Like most other families on the island, we lived off the land on what we could produce or trade for. Throughout my childhood, I enjoyed the traditional family lifestyle that consisted of many family gatherings, taking care of the animals, attending church, and of course, going to 'festas'. As a child I had the basic necessities that my parents and grandparents never failed to provide for me. School was extremely important to me, and my mother especially, never failed to encourage me. I enjoyed the childhood games we kids played on the streets, and our family from my father's side lived on the same street; grandparents, uncles, cousins, etc., just down a ways from the town's "Largo da Fontinha".
In the mid 1960s, my grandparents, from my mother's side, moved to the United States and settled in the San Francisco Bay Area. Soon after, most of my mother's family moved to the bay area as well, and we soon followed. In 1972, I was ten years old, and spoke not a word of English, which was scary for a ten-year-old. We moved in with my grandparents for a few months, and soon after, into our own place. I immersed myself in school, and within six months, was proficient in English and at the top of my 5th grade class. I did well throughout my school years, graduated, and went on to attend and graduate from Golden Gate University with a business degree and later, onto Le Cordon Bleu Culinary Institute.
I spent my early twenties operating restaurants. In fact, at 19 years old, I was promoted to General Manager, and within a year, was running a 3 plus million-dollar restaurant. Within 5 years, I was promoted to Area Manager. I spent 17 years with my first company and my next 10 years as a Director of Operations for another restaurant group on the West Coast. Soon after, I was recruited by a financial group that had no restaurant experience, in order to start up a new franchise in California. Eight years later, we had 39 restaurants and three franchise brands, earning over 129 million a year. By then I was the Chief Operating Officer for the company and doing well in running and developing the brands. After I left that restaurant group, I decided to start my own restaurant consulting company, which led me to where I am today.
After 40 plus years in the San Francisco Bay Area, my beautiful wife Teresa and I decided to move East, to beautiful North Carolina. Today, I'm developing my own 'Brand' called 'Chef JoeMac', a line of sauces, spices, and of course cookbooks. The cookbooks are available on many outlets, such as Amazon, Barnes and Noble, Walmart, and www.thechefjoemac.com. Our hope and goal is to buy property on the island of Terceira in the Azores and spend our time traveling.