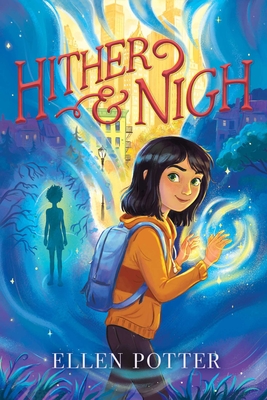 
On Our Shelves Now at:
Magic and mystery abound when a young girl discovers a secret, parallel New York City that may help her find her missing brother in this middle grade fantasy adventure that’s a “thrilling page-turner” (Kirkus Reviews) for fans of Thirteen Witches and James Riley.

Could lessons in magic make everything right again?

Nell Batista has been in trouble one too many times. Now she’s down to her last chance—literally. Join the Last Chance Club or be expelled from school. The kids in the club are an odd group, but when their teacher starts giving lessons in magic, things quickly go completely off the weird scale. Nell doesn’t believe in it at first; after all, she’s a smart city kid, and there has been nothing magical in her life since her brother, River, disappeared three years ago.

But this magic is real—and powerful. As their skills grow, Nell and her new friends discover a parallel New York City called the Nigh. It’s a place as delightful as it is scary, sizzling with magical energy, where statues can talk, magicians ride on giant dogs, and monsters roam Central Park. And it is all controlled by the terrifying Minister, who might hold the key to finding Nell’s missing brother. Just how far will Nell go to find him, and who can she trust in a world topsy turvy with enchantment?
Ellen Potter is the author of more than twenty award-winning novels for children and young adults, including Olivia Kidney, Slob, the Big Foot and Little Foot series, the Piper Green and The Fairy Tree series, The Humming Room, Pish Posh, and The Kneebone Boy. Several of her books have been chosen by the New York Public Library for their Best 100 Books for Children list and have appeared on numerous state reading lists. Her nonfiction writing book, Spilling Ink, A Young Writer’s Handbook, coauthored with Anne Mazer, was also chosen by the New York Public Library as a Best 100 Books for Children. Ellen lives in upstate New York with her family. For more information about Ellen and her books, visit EllenPotter.com.
A New York City seventh grader at Bright Futures Academy, Nell Batista faces detention with eighth graders Annika, “Crud,” and Tom. Annika has brown hair and green eyes; Crud has dark hair; Tom has yellow hair and blue eyes. They are startled when their detention monitor, Mr. Boot, announces he is there to teach them magic using chopsticks. That day, each of them is permitted to wish for something lost, and Nell chooses her missing brother, River, who disappeared three years ago from Washington Square Park. Nell’s life becomes a dizzying mix of magic classes, everyday problems with friends and family, and eventually, a journey to the Nigh—a parallel realm where magical beings dwell. Nell returns to Hither (her world) but suspects her brother River was brought to Nigh, and makes another expedition there with her friends. This is a whimsical, ambitious story, built by children’s imagination and numerous significant subplots. It is grounded by Nell’s first-person storytelling and her love for River. The abundance of plotting is further anchored by the moral decisions each character must make: should Nell cage a magical creature to find her brother? Did Annika use social media to bully a classmate? Universal realistic themes are used as jumping-off points for magical elevators, talking park statues, and other fantastical details that readers will find appealing, and the action ends on a cliffhanger that will leave tweens wanting more. No skin tones are described.

VERDICT A domestic fantasy that covers a lot of ground with solid character development, this novel will be enjoyed by many readers.
— School Library Journal

"Readers hoping to become enmeshed in conspiracies with links to folklore, mythology, and literature will be in heaven....A thrilling page-turner."
— Kirkus Reviews

"Balancing the tweens’ everyday social pressures with a dangerous quest across the fantastical 19th-century version of New York City that is the Nigh, Potter (the Big Foot and Little Foot series) satisfyingly blends contemporary snark with physical adventures heightened by spell-casting misfires, anxious close calls, and just-scary-enough monsters."
— Publishers Weekly

"[Hither & Nigh is] one of my favorite books of 2022 - and ever. I LOVED it and highly recommend it to anyone who loves unique, surprising stories with strong character development and hopeful, magical stories."