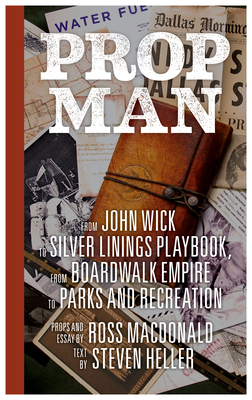 
In Stock—Click for Locations
This exclusive behind-the-scenes look at the art and design of graphic props for popular films and TV shows like Parks and Recreation, John Wick, Silver Linings Playbook, The Knick, and Boardwalk Empire is the perfect gift for movie buffs.

In Prop Man, discover the secret history of the books, cards, letters, maps, and legal papers that play central and supporting roles in many of your favorite films and TV shows—from the diary Nicolas Cage's character discovers in National Treasure 2 to the Pawnee town charter in Parks and Recreation. The man responsible for their authentic look, Ross MacDonald, has led a double life as both an illustrator and writer, contributing to the New York Times, the New Yorker and Vanity Fair, among other national publications, and a designer and fabricator of iconic props for more than one hundred and twenty films and TV series.

In this visual and informative collection, learn about the methods and artistry behind MacDonald's most recognizable props through an interview with design critic Steven Heller and a selection of materials that reveal the process behind the prop designer's meticulous work.
Steven Heller was an art director at the New York Times for thirty-three years, originally on the OpEd Page and for almost thirty of those years with the New York Times Book Review. Currently, he is cochair of the SVA / NYC MFA Designer as Entrepreneur Department. He is the author and coauthor of two hundred books on graphic design, satiric art, and illustration and writes "The Daily Heller" column for Printmag.com. He lives in New York City.

Ross MacDonald has led a secret double life designing and fabricating props for more than one hundred and twenty movies and television series. Born and raised in the backwoods of Canada, he lived for many years in New York City before finally before landing in Newtown, Connecticut.
"In this stunning work, MacDonald illustrated that the devil is in the details for a prop man....His skillful work for more than 100 films and television series is on lavish photographic display here....The star of the show is the plethora of prop photographs and illustrations divided among sections for books, documents, illustrations, packaging and periodicals. As with many titles from Princeton Architectural Press, the design is gorgeous and clean."Library Journal

"A veteran prop designer for film and TV brings his passion for his craft to this enlightening volume....[MacDonald's] zeal for perfection is infectious and impressive-when reproducing a newspaper front page, he researched the day’s weather for its upper right corner....Cinephiles will savor every last detail."
- Publishers Weekly