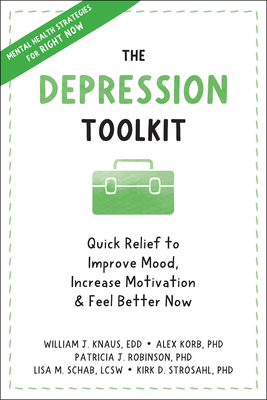 
On Our Shelves Now at:
William J. Knaus, EdD, is a licensed psychologist with more than forty-six years of clinical experience working with people suffering from anxiety, depression, and procrastination. He has appeared on numerous regional and national television shows, including The Today Show, and more than one hundred radio shows. His ideas have appeared in national magazines such as U.S. News & World Report and Good Housekeeping, and major newspapers such as The Washington Post and Chicago Tribune. He is one of the original directors of postdoctoral psychotherapy training in rational emotive behavior therapy (REBT). Knaus is author or coauthor of more than twenty-five books, including The Cognitive Behavioral Workbook for Anxiety, The Cognitive Behavioral Workbook for Depression, and The Procrastination Workbook. Alex Korb, PhD, is a neuroscientist, writer, and coach. He has studied the brain and mental health for more than fifteen years, starting with an undergraduate degree in neuroscience from Brown University; before earning a PhD in neuroscience from the University of California, Los Angeles (UCLA). He is author of The Upward Spiral and The Upward Spiral Workbook, and is currently adjunct assistant professor at UCLA in the department of psychiatry and biobehavioral sciences. Outside of the lab, he is available for personal coaching, consulting services, and speaking engagements. He is head coach of the UCLA Women's Ultimate Frisbee team, and has a wealth of experience in yoga and mindfulness, physical fitness, and even stand-up comedy. Patricia J. Robinson, PhD, is director of training and program evaluation at Mountainview Consulting Group, Inc., a firm that assists health care systems with integrating behavioral health services into primary care settings. She is coauthor of Real Behavior Change in Primary Care and The Mindfulness and Acceptance Workbook for Depression. After exploring primary care psychology as a researcher, she devoted her efforts to its dissemination in rural America, urban public health departments, and military medical treatment facilities. Lisa M. Schab, LCSW, is a practicing psychotherapist in the greater Chicago, IL, area; and author of several self-help books, including The Anxiety Workbook for Teens and The Self-Esteem Workbook for Teens, as well as the teen guided journals, Put Your Worries Here and Put Your Feelings Here. She has been interviewed as an expert on the Milwaukee television stations WTMJ-TV and WISN-TV, and for articles in The New York Times, Scholastic's Choices magazine, Teen Vogue, Psych Central, and Your Teen Magazine. Schab has authored regular columns on tweens and teens for Chicago Parent, and on healthy families for The Sun Newspapers. She is a member of the National Association of Social Workers (NASW). Kirk D. Strosahl, PhD, is cofounder of acceptance and commitment therapy (ACT), a cognitive behavioral approach that has gained widespread adoption in the mental health and substance abuse communities. He is coauthor of Brief Interventions for Radical Change and In This Moment. Strosahl provides training and consultation services for Mountainview Consulting Group, Inc. He is a pioneer in the movement to bring behavioral health services into primary care.