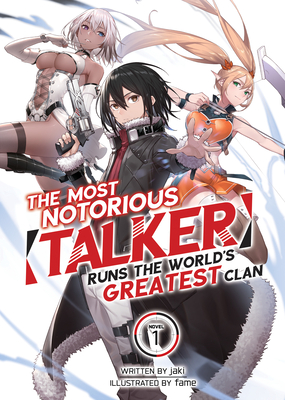 
Not On Our Shelves—Ships in 1-5 Days
A cunning, ruthless boy does whatever it takes to leave his mark on the world in this swords-and-sorcery tale! (And don't miss the manga adaptation, also from Seven Seas.)

Noel longs to be a Seeker like his heroic grandfather, slaying the beasts that emerge from Abysses and exploring far-off lands. Unfortunately, it turns out he’s nothing but a measly Talker–a job with no combat skills whatsoever. Undaunted, Noel sets out to establish the strongest clan in all the land, using his silver-tongued Talker skills to unite assassins and heroes under his leadership.
jaki is a Japanese author best known for The Most Notorious “Talker” Runs the World’s Greatest Clan.

fame is a Japanese artist best known for the light novel illustrations in Berserk of Gluttony and The Most Notorious “Talker” Runs the World’s Greatest Clan.