Cancer, Research, and Educational Film at Midcentury: The Making of the Movie Challenge: Science Against Cancer (Rochester Studies in Medical History #50) (Paperback) 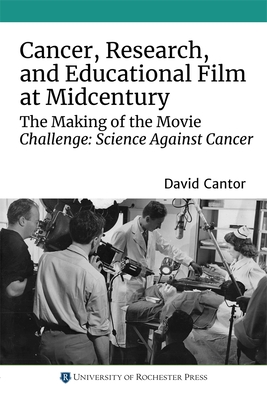 Cancer, Research, and Educational Film at Midcentury: The Making of the Movie Challenge: Science Against Cancer (Rochester Studies in Medical History #50) (Paperback)


Not On Our Shelves—Ships in 1-5 Days
The story of a forgotten health education film, Challenge: Science Against Cancer (1950), and what it tells us about mid-twentieth century North American cancer research, medical filmmaking, and health education campaigns. In 1949 the U.S. National Cancer Institute (NCI) and the Canadian Department of National Health and Welfare (DNHW) commissioned a film, eventually called Challenge. Science Against Cancer, as part of a major effort to recruit young scientists into cancer research. Both organizations feared that poor recruitment would stifle the development of the field at a time when funding for research was growing dramatically. The fear was that there would not be enough new young scientists to meet the demand, and that the shortfall would undermine cancer research and the hopes invested in it. Challenge aimed to persuade young scientists to think of cancer research as a career. This book is the story of that forgotten film and what it tells us about mid-twentieth century American and Canadian cancer research, educational filmmaking, and health education campaigns. It explores why Canadian and American health agencies turned to film to address the problem of scientist recruitment; how filmmakers turned such recruitment concerns into something they thought would work as a film; and how information officers at the NCI and DNHW sought to shape the impact of Challenge by embedding it in a broader educational and propaganda program. It is, in short, an account of the important, but hitherto undocumented, roles of filmmakers and information officers in the promotion of post-Second World War cancer research. This book is openly available in digital formats thanks to a generous grant from the Andrew W. Mellon Foundation.