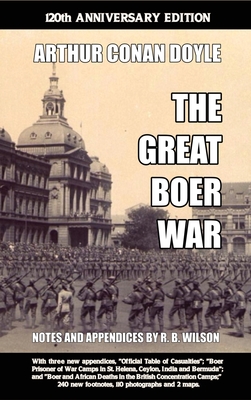 By Arthur Conan Doyle, R. B. Wilson (Appendix by)

A new edition of Arthur Conan-Doyle's classic account of the Second Anglo-Boer War, fought between 1899 and 1902. This edition has been completely reset and updated, and contains three new appendices providing details of three additional important aspects of the war: total military casualties on both sides; the Boer prisoner of war camps in the Caribbean, the island of St. Helena, Ceylon and India; and a comprehensive overview of the British concentration camps and their effect upon the Boer and African populations..

In addition, it has 240 brand new footnotes explaining terms, personalities, and events to the present-day reader-in addition to the 19 original footnotes by the author.

Lavishly illustrated with 110 rare photographs and two new maps, this new edition is the ultimate edition of Conan-Doyle's original masterpiece, which remains the standard by which all other accounts of the conflict are measured.

Compiled by the author while serving as a medical doctor in Bloemfontein, the book starts by covering the origin of the Boer republics, and their dealings with the British and other emigrants on the Rand which laid the foundation of the casus belli.

From there it moves onto a fast-moving and factual account of the various battles and campaigns which saw initial British defeats turned into rapid advances into the Boer heartlands. An expected quick Boer surrender never materialised, and the conflict devolved into a hard-fought guerrilla war which saw nearly twice as many British troops deployed into the Boer republics as the latter's entire population: men, women, and children combined.

This is a riveting story which has lost none of its drama in the past century, and a conflict whse reverberations can still be felt to the present day.