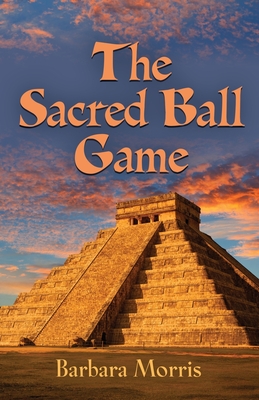 It's 900 AD in Chichen Itza, Mexico. Who will win The Sacred Ball Game, a fiercely fought sport played to honor the god Kukulkan?

Will it be Dzek, the prince who was kidnapped and is held hostage? Or will it be a fellow prince and hostage, the muscular, cunning Zacuul?

The outcome is vital for tradition demands that the winner must behead the loser, It's a grim and bloody death, but it is honorable because the loser's spirit rises to the gods to become spokesman and protector of Chichen Itza. The winner is widely acclaimed, laden with gold and jewels and freed to return to his home city.

Though the story is fictitious, it is based loosely on ancient Mayan culture. The protagonist, Dzek, has been a hostage for six years, ever since he was kidnapped at age nine. He has tried to escape many times.

Two other young hostages are Poco, a small crippled lad, Dzek's best friend and admirer; the other is Zacuul, a strong, but lazy and selfish young man who is content to remain in Chichen Itza as long as he can live an easy life of excellent food, a comfortable home, cared for by slaves and free to play the game every day.

The three hostages are free to move about the city; however, each has his own warrior-guard who stays with him day and night. They are as close as shadows. Dzek detests his guard, Otaan, who, in turn, hates him and does what he can to make Dzek's life miserable. As long as these boys are well treated, even as captives, their fathers, rulers of rival cities, will not attack Chichen Itza for if they do, their sons will be killed.

The plucky female character, Chuen, is the spirited daughter of the city's Chief Medicine Priest. She is treated as an outcast because she breaks tradition: she learns medicine from her father, and unlike "normal" girls who are chaperoned, are subject to men and are trained for traditional female duties, Chuen may be the world's first feminist: not only does she practice medicine, she's a natural athlete. She runs like the wind. She speaks up and acts as equal to a man.

When Dzek is chosen as captain of the Gold Team in the Sacred Ball Game, Chuen offers to help him train.

Reluctant at first to accept help from a mere girl, Dzek finally agrees.

Suddenly Chichen Itza is plagued by locusts which demolish the newly planted corn. A drought follows, threatening to dry up the new seed. To appease the gods, the sweet little orphan slave girl, Tonina, who has been loved and cared for by Chuen and her father, is sacrificed in a ceremonial drowning in the Well of Sacrifice.

Tonina's sacrifice brings rain; training for the Sacred Ball game goes on. Dzek decides to give purpose to his life by winning the game, being freed, then returning with an army to rescue Poco. But vindictive Zacuul has his own plan to win; he viciously injures Dzek's ankle. Chuen minsters to the ankle, tries to raise Dzek's spirits.

As Dzek slowly heals, Chuen learns of a plot to kill him--a "jaguar attack" on his way home. It is now Chuen who contrives an escape plan, but Dzek, in pain and dispirited, has to be convinced, for Chuen's plan calls for her to steal the drug, balache, known as the "Holy Intoxicant" from within the dark, sacred depths of the Temple of Kukulkan. This could plunge her to eternal punishment. Chuen plans to slip the balache into the community pot of stew while the team and the guards are celebrating at the end of the game. It will put them into a drugged sleep. "It is then", she tells Dzek, "that you must escape." Even though he begs her to escape with him, and she loves him, she refuses. Her duty is to remain and use her healing powers here on her people.

However, as Chuen, terrified but bold, steals the balache, fate intervenes; with surprising speed, it changes the lives of both o.