Oh, This House of Hatters: An Absurdist Tale - Seldom Always Something Not in Between (Hardcover) 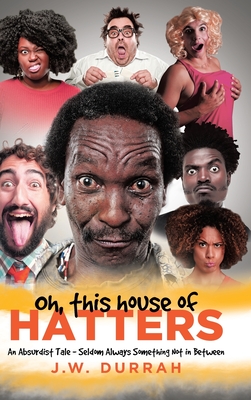 Oh, This House of Hatters: An Absurdist Tale - Seldom Always Something Not in Between (Hardcover)

Louis and Bernice Johnson are a rather eccentric family with a teen daughter, Cynthia, who is truly her mother and father's daughter. The family is pleasantly insane, as well as the visitors who come to their home where begins the nonsense of dead bodies appearing and disappearing. There is the promise of a possible resolution to this rather peculiar situation by the appearance of Police Inspector Armond Post, on loan from Scotland Yard to aid in police procedures here in America.

The Johnsons are visited by Cynthia's school psychologist and also by neighbors who want to help their neighbors Louis and Bernice Johnson, whom they believe to be in trouble--maybe even being held hostage by a deranged murder who has been tossing bodies from the window of the Johnson's living room. It does not take long to discover that each visitor has their own issues that are exposed by the Johnsons' daughter who does so by becoming a chicken and a raging dog. It is sweet and comedic black humor that is at once silly, absurdist humor.