Beyond the Betrayal: The Memoir of a World War II Japanese American Draft Resister of Conscience (Nikkei in the Americas) (Hardcover) 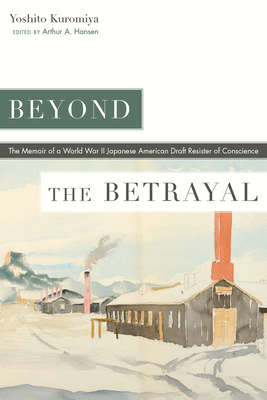 Beyond the Betrayal: The Memoir of a World War II Japanese American Draft Resister of Conscience (Nikkei in the Americas) (Hardcover)


Special Order—Subject to Availability
Beyond the Betrayal is a lyrically written memoir by Yoshito Kuromiya (1923–2018), a Nisei member of the Fair Play Committee (FPC), which was organized at the Heart Mountain concentration camp. The first book-length account by a Nisei World War II draft resister, this work presents an insider’s perspective on the FPC and the infamous trial condemning its members' efforts. It offers not only a beautifully written account of an important moment in US history but also a rare acknowledgment of dissension within the resistance movement, both between the young men who went to prison and their older leaders and also among the young men themselves. Kuromiya’s narrative is enriched by contributions from Frank Chin, Eric L. Muller, and Lawson Fusao Inada.

Of the 300 Japanese Americans who resisted the military draft on the grounds that the US government had deprived them of their fundamental rights as US citizens, Kuromiya alone has produced an autobiographical volume that explores the short- and long-term causes and consequences of this fateful wartime decision. In his exquisitely written and powerfully documented testament he speaks truth to power, making evident why he is eminently qualified to convey the plight of the Nisei draft resisters. He perceptively reframes the wartime and postwar experiences of the larger Japanese American community, commonly said to have suffered in the spirit of shikata ga nai—enduring that which cannot be changed—and emerged with dignity.

Beyond the Betrayal makes abundantly clear that the unjustly imprisoned Nisei could and did exercise their patriotism even when they refused to serve in the military in the name of civil liberties and social justice. Kuromiya’s account, initially privately circulated only to family and friends, is an invaluable and insightful addition to the Nikkei historical record.

Arthur A. Hansen is emeritus professor of history, founding director of the Japanese American Project of the Oral History Program and the Center for Oral and Public History, and founding faculty member of the Asian American Studies Program at California State University, Fullerton. He has been honored as both the Outstanding Teacher and the Outstanding Faculty Member in the College of Humanities and Social Sciences at CSUF. He was senior historian at the Japanese American National Museum and received the Distinguished Lifetime Achievement Award from the Association for Asian American Studies in 2007 and the Sue Kunitomi Embrey Legacy Award from the Manzanar Committee in 2014. He is also the author of Barbed Voices: Oral History, Resistance, and the World War II Japanese American Social Disaster and editor of Nisei Naysayer: The Memoir of Militant Japanese American Journalist Jimmie Omura.
“The significance of this work goes beyond the specific historical stories it tells. It is a timely reminder that each and every individual citizen must ask themselves, ‘What is the citizen’s rightful response to constitutional transgressions? What, indeed, is a citizen’s responsibility when racially based civil rights restrictions are imposed by an errant government?’”
—Cherstin Lyon, Southern Oregon University

“A wonderful and most important contribution on the Japanese American tragedy that befell this
innocent group during the Second World War. Yoshito Kuromiya performs an outstanding feat of
filling in the details from the Heart Mountain resisters to the draft and exploring and explaining his personal reasons for choosing his course of action.”
—Tetsuden Kashima, University of Washington