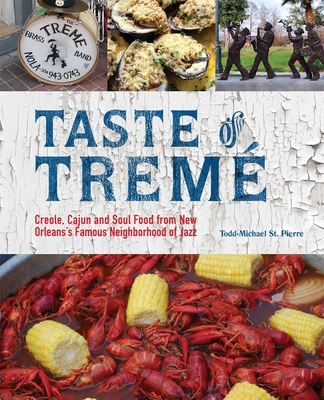 
Not On Our Shelves—Ships in 1-5 Days
(This book cannot be returned.)
Dive into the heart of New Orleans and whip up classic Cajun and Creole comfort food in your own kitchen and laissez les bons temps rouler.

In Tremé, jazz is always in the air and something soulful is simmering on the stove. This gritty neighborhood celebrates a passion for love, laughter, friends, family and strangers in its rich musical traditions and mouth-watering Southern food. Infuse your own kitchen with a Taste of Tremé by serving up its down-home dishes and new twists on classic New Orleans favorites like:

Including fascinating cultural facts about the music, architecture and dining that make up Tremé, this book will have your taste buds tapping to the beat of a big brass band.


Todd-Michael St. Pierre, Cajun/Creole Foodie and south Louisiana native, is the author of popular cookbooks, like Taste of Tremé, A Streetcar Named Delicious & The Southern Po'Boy Cookbook! And of Children's picture books, including, The Louisiana State Bird Pageant, Chicory & Roux (A Pelican Publishing title) & A Woolly Mammoth on Amelia Street! Coming soon "Sabrina's Sombrero" a bilingual book from Prytania Press! He has served as a judge for The Reading Rainbow Young Writers and Illustrators Contest and has developed recipes for Cooking Light magazine. Todd-Michael's books have been featured in The San Francisco Chronicle, The Advocate, The Times-Picayune, The Denver Post, The Christian Science Monitor, The Daily Meal, Southern Living Magazine, Louisiana Cookin' Magazine and on AOL Food. He also contributes, as a writer, to elementary and middle-school textbooks published by Oxford University Press, McMillan, Pearson & HarperCollins! His website is LouisianaBoy.com