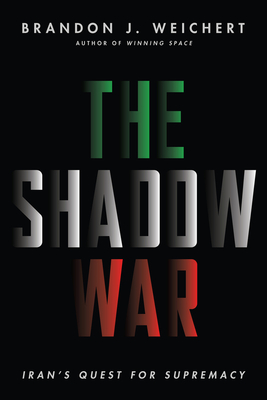 
Backordered
There has been an ongoing shadow war between the West and Iran, one that could explode and plunge the world into a third world war. The Biden Administration's move to make peace at any cost with the mad mullahs of Iran may be the very spark for a regional war that turns into a global conflict. Thankfully, there is a path forward for the United States and the solution can be found in the policies outlined by the previous Trump Administration; in the form of the Abraham Accords and daring "maximum pressure" campaign against Iran. Should President Biden continue down the destructive, illusory path to "peace" with Iran, he will not only have abandoned America's long-standing allies, but he will have also helped to trigger the very conflict he seeks to avoid. In The Shadow War: Iran's Quest for Supremacy, author Brandon Weichert explores how the next world war is unfolding right before our eyes and explains how the American government can avoid it while maintaining its position of strength and support for its allies.
Brandon J. Weichert is a geopolitical analyst who runs The Weichert Report: World News Done Right and is the author of Winning Space: How America Remains a Superpower. He is an internationally recognized expert on US national security and emerging technology. Weichert is a Subject Matter Expert for the Department of the Air Force and travels the country lecturing to various audiences in the technology sector, academia, and the defense sector. A former Congressional staffer, Weichert splits his time between sunny Southwest Florida and bucolic Northern Virginia.