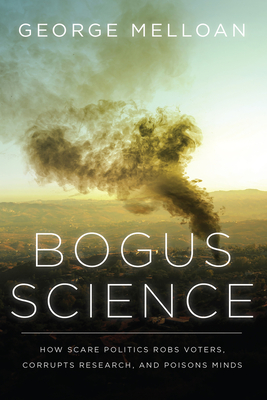 
Not On Our Shelves—Ships in 1-5 Days
The good name of true science, which has transformed the world we live in marvelous ways over the last 200 years, has been hijacked for several decades by politicians seeking to employ science and scientists in support of dubious political goals. They have used their power over grants to universities and their power over federal regulatory agencies and United Nations initiatives to this end.
Bogus Science examines a series of scares perpetrated by American politicians in collaboration with the UN over the last fifty years: DDT, acid rain, the "ozone hole" and of course "global warming." These scares have cost the world trillions of dollars and all have been debunked by serious scientists.
Author George Melloan argues that protection of the environment is a goal that all rational people share, and the incredible advance of genuine science has brought about great strides in creating a cleaner, healthier, and safer human environment in the course of modern history. But that noble cause has been hijacked by zealots motivated by other impulses, which in the extreme derive from what some social philosophers describe as anti-humanism. "Environmentalist" claims, even when deceptive, are particularly seductive to young people seeking meaning in their lives. And sure enough, zealots have brought their influence to bear on millions of schoolchildren who have been told that their lives will be cut short if they disregard the warnings of modern Pied Pipers.
While discussing the power politicians have over science, Melloan looks into the growing scandal in science about a lack of reproducibility of experiments or studies purporting to be "scientific." Real scientists know that if an experiment or a computer model is to be deemed valid, the same methodology employed by other scientists must achieve the same result. The absence of this, often in studies printed in professional journals, is shocking to many scientists.