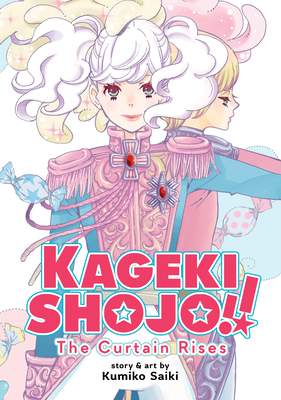 This is book number 1 in the Kageki Shojo!! series.

The critically acclaimed shoujo manga about the drama of all-women musical theater! (And don't miss the anime adaptation!) Watanabe Sarasa has always dreamed of being an otokoyaku, an actress who plays male roles in an all-female theater troupe. Narata Ai also has a dream: the disgraced former idol wants to live in a world full of women and not have to deal with men at all. When they both get into a competitive all-girls theater school, the stage is set for Ai and Sarasa to enter the limelight and take their first step toward stardom.
Kumiko Saiki is a veteran Japanese manga creator best known for her shoujo and josei work, including Hanayoi Douchuu and Kageki Shojo!!