Wonderlands: Essays on the Life of Literature (Paperback) 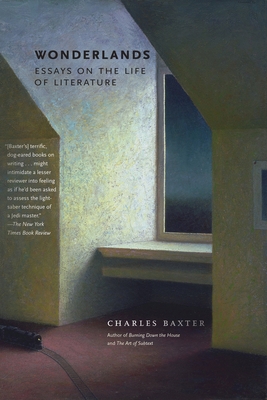 Wonderlands: Essays on the Life of Literature (Paperback)

Searching and erudite new essays on writing from the author of Burning Down the House.

Charles Baxter’s new collection of essays, Wonderlands, joins his other works of nonfiction, Burning Down the House and The Art of Subtext. In the mold of those books, Baxter shares years of wisdom and reflection on what makes fiction work, including essays that were first given as craft talks at the Bread Loaf Writers’ Conference.

The essays here range from brilliant thinking on the nature of wonderlands in the fiction of Haruki Murakami and other fabulist writers, to how request moments function in a story. Baxter is equally at home tackling a thorny matter such as charisma (which intersects with political figures like the disastrous forty-fifth US president) as he is bringing new interest to subjects such as list-making in fiction.

Amid these craft essays, an interlude of two personal essays—the story of a horrifying car crash and an introspective “letter to a young poet”—add to the intimate nature of the book. The final essay reflects on a lifetime of writing, and closes with a memorable image of Baxter as a boy, waiting at the window for a parent who never arrives and filling that absence with stories. Wonderlands will stand alongside his prior work as an insightful and lasting work of criticism.

Charles Baxter is the author of fourteen books, most recently the novel The Sun Collective. His stories have appeared in The Best American Short Stories, The Pushcart Prize Anthology, and The O. Henry Prize Story Anthology. He lives in Minneapolis, Minnesota.

I have no doubt that [Baxter’s] collection of craft essays will be both illuminating and beautiful. . . . A revelatory craft book is a rare and wonderful gift for a writer-slash-reader, and I look forward to devouring this one."—Jessie Gaynor, Literary Hub

“Baxter’s voice is erudite, witty, and humble, and he brings his observations together with smart quips on the writing life . . . Budding novelists, take note.”—Publishers Weekly, starred review

“It is always gratifying to spend time with a smart writer who has taken the time to study narrative, how it works, what the construction of stories tells us about ourselves.”—Lori Soderlind, The New York Times

“Request, inventory, disappearance, lushness, charisma. You probably won't find these terms in any writing tutorial. But in the set of sparkling essays that make up Wonderlands, celebrated Minnesota author Charles Baxter draws on this vocabulary to show how writers can put flesh on the bones of a good tale. . . . Wonderlands will take you on some fascinating jaunts.”—Tom Zelman, The Star Tribune

“Nearly every essay, including Baxter’s pieces on toxic narrative, dreams, and dramatic imagery, is hybridized with personal anecdotes that inspire, explain, and empathize.”—Joseph Peschel, The Brooklyn Rail