Most Dangerous, Most Unmerciful: Stories from Afghanistan (Hardcover) 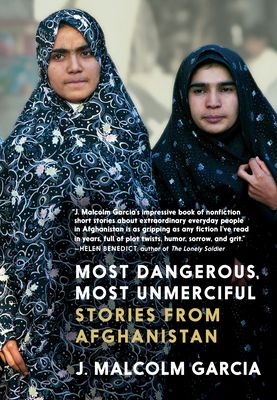 Most Dangerous, Most Unmerciful: Stories from Afghanistan (Hardcover)


On Our Shelves Now at:
Timely literary reporting from Afghanistan by one of our most important nonfiction writers includes insightful new writing since the US pull-out in 2021.

"J. Malcolm Garcia has channeled the empathetic ear of Studs Terkel and the investigative skills of the best literary journalists ... These stories will remain in the heart and mind’s eye forever.” –Beth Taylor, author of The Plain Language of Love and Loss


Reporting from Kabul and Kandahar between 2001 and 2015, J. Malcolm Garcia tells us what actually happened to the Afghan people as the conflict between first world nations and fundamentalists raged. In telling the stories of ordinary Afghans, Garcia shows the impact of years of occupation and war—and the sudden and harsh changes as new occupiers push in—on a people and their culture.

Garcia meets Laila Haidary—everyone calls her “mother”—who, with no resources to speak of, gives addicts living on the street one month of detoxification and clean living, while at the same time sending her own children to make the perilous journey to Western Europe as best they can. And there is nine-year-old Ghani, who earns a few dollars a day collecting cans on the street to support his two brothers and sister now that his father has died of a brain tumor. There are the translators and fixers Garcia hires, who risk their lives working for foreigners against the warnings of the Taliban, and also the US soldiers who don’t understand what their mission is here, and why they can’t just do what they are trained to do, which is to seek out and kill the enemy.

J. Malcolm Garcia has been compared to the Russian writer Svetlana Alexievich, winner of the 2015 Nobel Prize in Literature, for how the voices of everyday people ring out in the stories he tells. Most Dangerous, Most Unmerciful is an essential work of literature that documents one of the true disasters of our age, at the same time as it celebrates the human endurance and ingenuity of the Afghans we meet in these pages, and affirms the role journalists can play to make sure their stories can be heard.
J. Malcolm Garcia has reported from Afghanistan, Pakistan, Chad, Sierra Leone, Haiti, Honduras, Bolivia and Argentina. His beat is the stories that usually go unreported, the lives of people not usually considered newsworthy or important, people who struggle just to survive. His work has been included in The Best American Travel Writing, The Best American Unrequired Reading, Best American Essays, and frequently appears in such publications as McSweeney’s, Guernica, Ascent and N+1, among others. Garcia is the recipient of the Studs Terkel Prize for writing about the working classes, and the Sigma Delta Chi Award for excellence in journalism. His previous books include Khaarijee: A Chronicle of Friendship and War in Kabul. His most recent book is The Fruit of All My Grief.

"Lyrical yet understated prose and the centering of Afghans’ own voices make this an indelible portrait of struggle and survival." —Publishers Weekly

"These extraordinary stories offer a rare and intimate view of America's longest conflict, and invite us to share the everyday joys and sufferings of war-weary Afghans. J Malcolm Garcia is the empathetic bridge our world needs, and an essential chronicler of our times.”—Brian Castner, author of The Long Walk

“J. Malcolm Garcia’s impressive book of nonfiction short stories about extraordinary everyday people in Afghanistan is as gripping as any fiction I’ve read in years, full of plot twists, humor, sorrow, and grit. Part Dickens, part Studs Terkel, the book reveals its characters’ lives with a refreshing candor I defy anyone not to relish.” —Helen Benedict, author of Wolf Season, Sand Queen, and The Lonely Soldier

“J. Malcolm Garcia's latest book exploring the back alleys and warrens of the American war in Afghanistan is profoundly relevant for Americans to read right now. While American leaders, social media trolls, and news pundits glorify street vigilantism and incite wider political violence, Garcia reminds us what war actually does to individuals, culture, and society. This isn't the Hollywood version, or a clever meme. In real war, no one wins, no one gets what they want, and everyone is tortured by the things they saw and did.” —Ben Brody, author of Attention Servicemember

"It takes a unique combination of moral seriousness, physical courage and wild honesty to bear witness to war's devastation and be able to convey to those who weren't there what it was like. Lucky for us, J. Malcolm Garcia is such a writer. His tremendous book about ordinary Afghans trying to endure two decades of conflict and occupation deserves a wide readership." —Matt Gallagher, author of Empire City and Youngblood