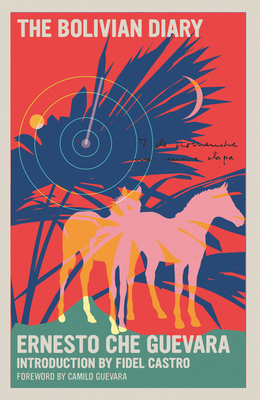 
Not On Our Shelves—Ships in 1-5 Days
The last diary of revolutionary Che Guevara with entries up until two days before his murder.

This new edition of Che Guevara's diary of the last year of his life describes Che's efforts to launch a guerrilla insurrection against the military government of Bolivia. It was found in his backpack when he was captured by the Bolivian Army in October 1967.This edition includes Fidel Castro's "A Necessary Introduction," exposing the lies of an earlier, pre-emptive edition prepared by the C.I.A. to discredit Che and the Bolivian expedition, as well as the Cuban Revolution itself.

The Bolivian Diary reveals an older, more time-tested, and health-compromised Che than either the exuberant The Motorcycle Diaries or the mature and implacable Congo Diary. There is rich irony here as he recounts the daily challenges faced by his small guerrilla band, the pronouncements of the military government, and the actions of the large military force attacking them. The last entry describes the day before Che's capture, two days before his murder.
ERNESTO GUEVARA DE LA SERNA was born in Rosario, Argentina, on June 14, 1928. While studying for a medical degree in Buenos Aires, he took a trip with his friend Alberto Granado on an old Norton motorcycle through all of Latin America, the basis for The Motorcycle Diaries. During his travels he witnessed the Bolivian revolution in 1953; and, in Guatemala in 1954, the overthrow of the democratically elected government of Jacobo Arbenz by US-backed forces. Forced to leave Guatemala, he went to Mexico City, where he linked up with exiled Cuban revolutionaries and met Fidel Castro in 1955. Che joined their expedition to Cuba, where the revolutionary war began in the Sierra Maestra mountains. At first Che was the troop doctor, and later became Rebel Army commander in July 1957.  Following the rebels’ victory on January 1, 1959, he was a key leader of the new revolutionary government and also of the political organization that in 1965 became the Communist Party of Cuba.