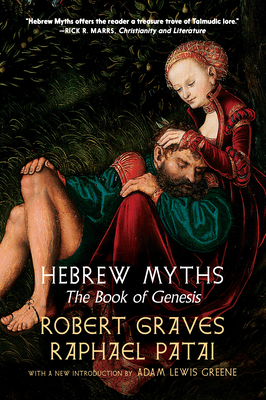 
Special Order—Subject to Availability
A scholarly approach to sixty-one stories from the book of Genesis, following in the lucid format of Graves' canonical The Greek Myths. With a new introduction by author of Bibliotheca, Adam Lewis Greene.

An exhaustive study of sixty-one stories from the Old Testament and the Torah, as well as pre-biblical texts censored for centuries, that nuance, extend, and complete the book of Genesis. Graves and Patai, renowned scholars of Greco-Roman and Hebrew mythology, transcend the Christian biblical and Judaic versions of these narratives, in order to redefine myth. Myths are reconceived as dramatic stories that form a sacred charter either authorizing the continuance or the alteration of religious beliefs. Authorized biblical texts are interpreted against the grain to expose folk tales, apocryphal texts, midrashes, and other little-known documents that the Old Testament and the Torah exclude. Thus, the mythological component underlying the theological component is revealed. This is a useful companion to Graves' The Greek Myths, as it puts forth the thesis that the Hebrews, unlike the Greeks, used myth to sermonize on national history and destiny. Though the authors were true intellectuals, they were considered mavericks by the mainstream academy.
Robert Graves (1895-1985) was a preeminent English poet, novelist, critic, translator, and scholar of classical mythology. He served in World War I--an experience recounted in his 1929 autobiography, Good-Bye to All That--and later became the first professor of English literature at the University of Cairo. Best remembered today for I, Claudius, The Golden Fleece, Reader Over Your Shoulder, The White Goddess, among many others. Raphael Patai (1910-1996) was a leading Hungarian anthropologist and scholar of Jewish and Middle Eastern studies. He wrote over thirty books, including Golden River to Golden Road, The Hebrew Goddess, The Arab Mind, The Jewish Mind, and The Seed of Abraham. He taught at many universities in Israel and the United States, including the Hebrew University of Jerusalem, Columbia University, Princeton University, and the University of Pennsylvania. Patai served as director of research for the Herzl Institute and editor of the Herzl Press. Adam Lewis Greene is a graphic artist and emerging publisher living in Durham, North Carolina. He is the founder of Writ Press and is best known as the creator of Bibliotheca, an unaffiliated, globally crowdfunded edition and translation of the Bible that highlights its essence not as an encyclopedia of religious doctrine but as a vast and diverse anthology of ancient literature.
“All the laconic scholarship and lightning sharp interpretations and insights which have made Graves’ studies of the Greek myths one of the most seductive source books of the decade are here brought to bear with equal effectiveness on the book of Genesis.” —Kirkus Reviews

“For its information and its insights, Hebrew Myths should be popular and valuable among anthropologists.” —Omer C. Stewart, American Anthropologist

“This work not only treats texts deriving from the same larger world that produced Genesis, it also provides extensive documentation of the subsequent rabbinic legends that arose in an attempt to understand the ‘fuller meaning’ of the text. In this arena, Hebrew Myths offers the reader a treasure trove of Talmudic lore.” —Rick R. Marrs, Christianity and Literature