The Enemies of Rome: The Barbarian Rebellion Against the Roman Empire (Paperback) 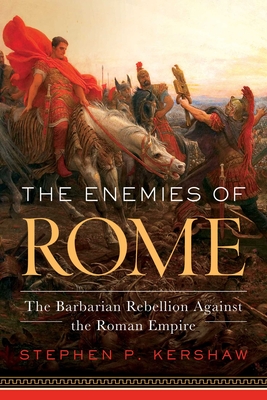 The Enemies of Rome: The Barbarian Rebellion Against the Roman Empire (Paperback)


Not On Our Shelves—Ships in 1-5 Days
A fresh and vivid narrative history of the Roman Empire from the point of view of the “barbarian” enemies of Rome.

History is written by the victors, and Rome had some very eloquent historians. Those the Romans regarded as barbarians left few records of their own, but they had a tremendous impact on the Roman imagination. Resisting from outside Rome’s borders or rebelling from within, they emerge vividly in Rome’s historical tradition, and left a significant footprint in archaeology. Kershaw builds a narrative around the lives, personalities, successes, and failures both of the key opponents of Rome’s rise and dominance, and of those who ultimately brought the empire down.

Rome’s history follows a remarkable trajectory from its origins as a tiny village of refugees from a conflict zone to a dominant superpower. But throughout this history, Rome faced significant resistance and rebellion from peoples whom it regarded as barbarians: Ostrogoths, Visigoths, Goths, Vandals, Huns, Picts and Scots.

Based both on ancient historical writings and modern archaeological research, this new history takes a fresh look at the Roman Empire through the personalities and lives of key opponents during the trajectory of Rome’s rise and fall.
Dr. Stephen P. Kershaw has spent the majority of his career in the world of the ancient Greeks, both intellectually and physically. He has been a Classics tutor for twenty-five years and currently teaches at Oxford University. Kershaw has been commissioned to write Oxford University's new course on the Minoans and Mycenaeans, which will include investigations into the Atlantis tale in relation to the eruption of the Santorini volcano. Kershaw also runs the European Studies Classical Tour for Rhodes College and the University of the South. He has written several books, including A Brief Guide to the Greek Myths and A Brief History of the Roman Empire. Dr. Kershaw lives in England.
“A superb alternate look at Roman history.”
— New York Journal of Books

“Ancient Rome faced many threats from outsiders, so-called barbarians. Relying upon a combination of sources—literature, mythology, and history (Plutarch, Livy)—Kershaw painstakingly chronicles them all in this often-grisly account of an empire under siege.”
— Booklist

“An interesting take on Roman history focused on the peoples that resisted its growth and eventually brought about its destruction.”
— Kirkus Reviews

"As his exhaustive survey shows, Atlantis has been adapted to countless ideologies and agendas over time, serving the needs of every sort of reader. The tortured moves that Mr. Kershaw documents, by which the Atlantis myth has been recast as fact and willfully misread, remind us of how vital such distinctions are for a society striving to stay free."
— Wall Street Journal [praise for Steve Kershaw's "The Search for Atlantis"]

"Readers interested in the classics will find this satisfying."
— Publishers Weekly [praise for Steve Kershaw's "The Search for Atlantis"]