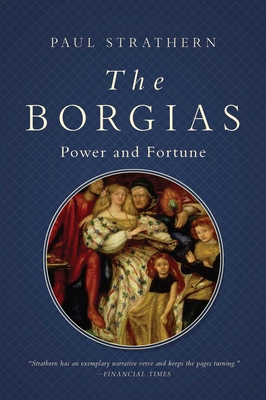 
Not On Our Shelves—Ships in 1-5 Days
(This book cannot be returned.)
The glorious and infamous history of the Borgia family—a world of saints, corrupt popes, and depraved princes and poisoners—set against the golden age of the Italian Renaissance.

The Borgia family have become a byword for evil. Corruption, incest, ruthless megalomania, avarice and vicious cruelty—all have been associated with their name. And yet, paradoxically, this family lived when the Renaissance was coming into its full flowering in Italy. Examples of infamy flourished alongside some of the finest art produced in western history.

This is but one of several paradoxes associated with the Borgia family. For the family which produced corrupt popes, depraved princes and poisoners, would also produce a saint. Previously history has tended to condemn, or attempt in part to exonerate, this remarkable family. Yet in order to understand the Borgias, the Borgias must be related to their time, together with the world which enabled them to flourish. Within this context the Renaissance itself takes on a very different aspect. Was the corruption part of the creation, or vice versa? Would one have been possible without the other?

The powerful forces which first played out in the amphitheaters of ancient Greece: hubris, incest, murder, rivalries and doomed families, treacheries of political power, twists of fate—they are all here. Along with the final, tragic downfall. All these elements are played out in full in the glorious and infamous history of the Borgia family.
Paul Strathern is a Somerset Maugham Award-winning novelist, and his nonfiction works include The Venetians, Death in Florence, The Medici, Mendeleyev's Dream, The Florentines, Empire, and The Borgias, all available from Pegasus Books. He lives in England.
"Historians who seek a wide readership, while giving their readers the drama they crave, must honor the historical record in all its complexity. The Borgias presents just such a nuanced account. Authoritative and well-written. Strathern has an admirable talent for the biographical sketch, particularly of artists and writers."
— Wall Street Journal

"Rich in telling details. The Borgias’ ambition was boundless; their legacy proved to be enormous. Not without reason did Machiavelli make Cesare the hero of The Prince."
— Economist

"In this accessible look behind the curtain, Strathern lays out the history of the infamous Italian clan. Strathern makes a tangled and thorny history readable."
— Publishers Weekly (starred)

"Strathern continues his investigation into powerful Italian clans, following The Medici with this equally engaging and informative history of a notorious family. To be immersed in this group biography is to visit a particularly exciting and consequential period in European history in all its high drama and richness of character. A magnet for all who are intrigued by this infamous clan and everyone versed in European history who is looking for a new perspective, this is an outstanding account."
— Booklist