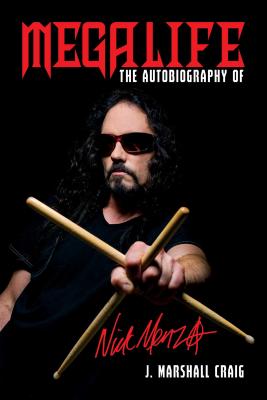 
Backordered
The uncensored story of one of rock’s greatest drummers who died doing what he loved best.

With Nick Menza behind the kit, Megadeth transitioned from celebrated cult band to international superstars. Rust in Peace, the first album to feature Menza and Marty Friedman, was instantly considered a classic, sold over a million copies, got nominated for a Grammy Award, and established what many consider to be the definitive Megadeth lineup. It was the beginning of a remarkable run in which the band would release three career-defining albums and tour the world many times over.

Success was a rollercoaster ride of highs and lows: sobriety and addiction, peace and tension, laughter and anger. Until one day it all came crashing down. Despite his contributions to the band’s most iconic and enduring work, when Menza was forced to seek treatment for a debilitating tumor in his knee, he awoke from surgery to learn he was being fired from the band by the man he considered a brother and mentor, the ever-enigmatic Dave Mustaine. The devastating news sent him into a spiral of anger and frustration, followed by a dark period of self-medication that nearly killed him.

Megalife: The Autobiography of Nick Menza is an unflinching look at life inside of one of metal’s most successful bands, from the back of the stage to the bunks on the bus, as well as a blow-by-blow account of the tumultuous, complicated relationship between Menza and Mustaine. It is also the singular story of a self-taught musician who achieved his dreams through sheer will and determination, watched it all disintegrate, and then rebuilt himself from scratch.
J. Marshall Craig is the author of, and contributor to, more than a dozen books and collected writings. These include his novel Eh Mail; his historical non-fiction book on World War I, You’re Lucky If You’re Killed; the environmental book Growing A Better America: Smart, Strong and Sustainable (with Chuck Leavell), and memoirs with Eric Burdon (Don’t Let Me Be Misunderstood), Chuck Leavell (Between Rock and A Home Place), Damion Young (Guilty By Association), and John Rocker (Scars & Strikes). His work appears in several literary collections with Tom Wolfe, Hunter S. Thompson, Jack Kerouac and others (The Outlaw Bible of American Literature); Hells Angels founder Sonny Barger, Che Guevara and others (She's A Bad Motorcycle) and former CNN talk show host Larry King (Remember Me When I'm Gone).

A resident of Southern California for most of his adult life, Canadian-born Craig now lives, writes, plays guitar and cooks in Cape Cod, Massachusetts.