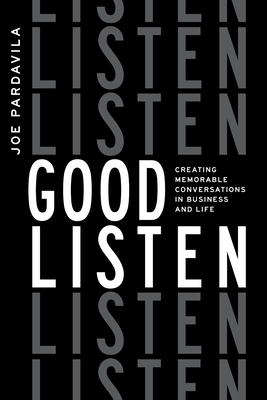 
Not On Our Shelves—Ships in 1-5 Days
The Secrets Behind Creating Compelling Conversation and Powerful Podcasts They say talk is cheap--but podcasting is currently a billion-dollar business. Now Joe Pardavila reveals how you can create the kind of conversations that draw both audiences and applause. Drawing on his many years as a radio host on a top-rated radio show in the New York City area, Joe shares a bevy of illuminating anecdotes featuring such superstars as Taylor Swift, Russell Crowe, Jennifer Aniston, John Mayer, and Chris Martin that demonstrate how the right communication skills can create magic moments--while the wrong ones can derail an entire conversation. He'll also show you how learning comedy improv techniques actually aids interviews. And, by the way, what you'll learn in Good Listen doesn't just apply to podcasting. Joe's mastery of "talking the talk" can work wonders in your personal life as well. If your everyday interactions aren't sparking your relationships, you'll discover how to not only find common ground with others but also create bonding opportunities that can carry you far in work, love, and life.
JOE PARDAVILA has produced over ten thousand hours of audio content over the course of his career in podcasting and terrestrial radio.Joe was a radio personality and producer on the legendary New YorkCity radio station, 95.5 PLJ, where he was part of the iconic "Scott & Todd in the Morning". He studied sketch and improv comedy at the UprightCitizens Brigade and was a founding member and actor in the NewYork-based sketch comedy group, Clip Show. The group performed at the Upright Citizens Brigade Theater and the People's Improv Theater, and their video sketches were featured onFunny or Die and the Huffington Post. He is the codirector, writer, and producer of the award-winning horror satire, "The Witches of Bushwick". Currently, he serves as the director of podcasts for Advantage Media GroupForbesBooks. Joe splits his time between Charleston, South Carolina, and Northern New Jersey with his wife Theresa and their dachshund, Nathan