A Student Workbook for Land of Hope: An Invitation to the Great American Story (Paperback) 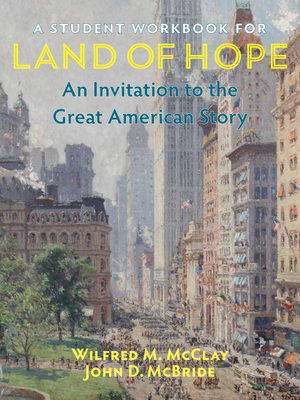 A Student Workbook for Land of Hope: An Invitation to the Great American Story (Paperback)


Special Order—Subject to Availability
Wilfred M. McClay is the G. T. and Libby Blankenship Chair in the History of Liberty at the University of Oklahoma. He served from 2002 to 2013 on the National Council on the Humanities, the advisory board for the National Endowment for the Humanities, and is currently serving on the U.S. Semiquincentennial Commission, which is planning for the 250th anniversary of the United States in 2026. Among his books is The Masterless: Self and Society in Modern America, which won the 1995 Merle Curti Award of the Organization of American Historians for the best book in American intellectual history. He was educated at St. John's College (Annapolis) and received his Ph.D. from the Johns Hopkins University. John McBride was educated at Rice University (BA 1968, MA 1971) and the University of Virginia (PhD 1977). He taught high school (mostly US History AP) in Chattanooga TN from 1974 to 2010, at the Baylor School and David Brainerd Christian School. He has also taught as an adjunct for the past 25 years at the University of Tennessee at Chattanooga, in political science and in history. For the past six years he has taught (as a volunteer and most recently as an adjunct for Georgia State University) at Walker State Prison, which is Georgia's character-and-faith-based prison. He enjoys employing a wide variety of teaching methods, including games, trivium-style debates, and group projects.