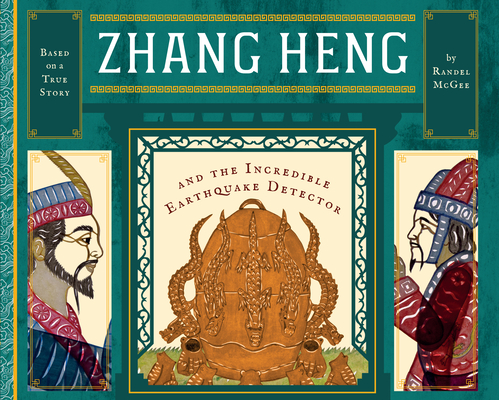 When thousands of people die in China's earthquakes, Emperor Shun Di does not know what to do as it takes days for a city to communicate the news to the Emperor. He assigns his wisest advisor, Zhang Heng, to create a device that will tell the Emperor and his court where an earthquake took place. Can Zhang Heng accomplish this impossible task?

Award-winning puppeteer Randel McGee who has studied the ancient art of shadow puppetry and performed all around the world brings his artistic prowess to the dying art of Chinese shadow puppetry. This beautiful picture book preserves both a remarkable true story and an incredible art form for generations to come.
Randel McGee is an internationally recognized storyteller, children’s performing artist, and the author of Paper Craft Fun for Holidays. He has studied the ancient art of shadow puppetry all around the world  and was an artist-in-residence with the California Arts Council and Idaho Commission of the Arts and served as a consultant with the California State Library System.
"A whimsical look, true in spirit, of the origins of the first seismoscope, this will have most readers longing to know more about Zhang Heng".
–Cynde Suite, School Library Journal

"Randel McGee has brought together his skill as a storyteller and a paper cut artist with glorious results. Between the covers of Zhang Heng and the Incredible Earthquake Detector is not only a fascinating story, but a delightful artistic experience."
—Sheila Wee, founding director of the Federation of Asian Storytellers (FEAST)

"I wish there were a wonderful book like this when I was a child in Hong Kong. Zhang Heng is a name familiar to Chinese children for generations."
—Suk Wah Bernstein, Novelist and Former Screenwriter, Shaw Studios, Hong Kong

"Ancient legends are woven into the narrative, like one about how earthquakes are caused by powerful dragons. Most distinctive, though, are the beautiful illustrations drawn in the style of shadow puppetry, which is a Chinese tradition. The distinctness of the art contributes to the powerful feeling of reading not just a story, but myth."— Lydia Mulvany, Starred Booklist Review

"One of the most helpful inventions in meteorology was created in China. Zhang Heng and the Incredible Earthquake Detector is about the scientist, Zhang Heng behind the first seismoscope or earthquake detector. Even though these devices have changed over time as technology has changed, they can still predict where and when an earthquake may hit. Zhang Heng was well known for his work in astronomy and math. I especially liked the use of dragons and toads around the machine.

The illustrations in this book are absolutely incredible. The vivid colors in the illustrations help to tell the story and demonstrate the dragons. The glossary in the back of the book is great for words I didn’t know. This is a great book and I recommend it." - Liam, age 10, Kids BookBuzz

"In scenes that recall two-dimensional forms of the ancient art of shadow puppet, this book introduces Zhang Heng, who was goaded by envious courtiers to create the first machine to tell when and where an earthquake had struck in China. The young inventor had always enjoyed creating devices for all sorts of purposes and came to the attention of the emperor, who invited him to come and live in the palace. The emperor’s favor caused the other courtiers to become envious of Zhang Heng and plot to get him removed. They suggested to the ­emperor that Zhang Heng should be able to create something that could tell where an earthquake hit as soon as it happened so that help could be dispatched. In a dream, Zhang Heng found a solution, which proved correct. An author’s note clarifies that although no one knows how Zhang Heng came to this idea, he did create the first successful seismoscope and that the details are lost to history. The illustrations in this book are charming and quaint; shadow puppets are usually depicted in black, but these are exquisitely colored. VERDICT: A whimsical look, true in spirit, of the origins of the first seismoscope, this will have most readers longing to know more about Zhang Heng". –Cynde Suite, School Library Journal