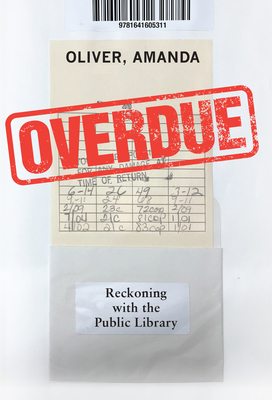 
In Stock—Click for Locations
"One part love letter, one part eulogy, Overdue tells the story of America’s public library system . . . Amanda Oliver proves herself a vibrant new literary voice . . . This is a book for all book lovers.” —Reza Aslan, author of Zealot: The Life and Times of Jesus of Nazareth

Who are libraries for, how have they evolved, and why do they fill so many roles in our society today?

Based on firsthand experiences from six years of professional work as a librarian in high-poverty neighborhoods of Washington, DC, as well as interviews and research, Overdue begins with Oliver's first day at an "unusual" branch: Northwest One.

Using her experience at this branch allows Oliver to highlight the national problems that have existed in libraries since they were founded: racism, segregation, and class inequalities. These age-old problems have evolved into police violence, the opioid epidemic, rampant houselessness, and lack of mental health care nationwide—all of which come to a head in public library spaces.

Can public librarians continue to play the many roles they are tasked with? Can American society sustain one of its most noble institutions?

Pushing against hundreds of years of stereotypes, romanticization, and discomfort with a call to reckoning, Overdue will change the way you think about libraries forever.
Amanda Oliver is a writer and former librarian. Her writing has been featured in the Los Angeles Times, Vox, Electric Literature, Medium, and The Rumpus. She has been interviewed about libraries and being a librarian for NPR, CBC Radio, Associated Press, and American Libraries Magazine. Oliver is a graduate of the MLS program at SUNY Buffalo and the MFA program at UC Riverside. A Buffalo, New York, native, she now lives and writes in the Mojave Desert near Joshua Tree.
"Amanda Oliver’s harrowing and moving tale is, among other things, an indictment of our country’s grotesquely inadequate social services. She demolishes whatever stereotypes we might carry of librarians and libraries." —Tom Lutz, award-winning author of The Kindness of Strangers

"Overdue paints a vivid and meticulously researched picture of American public libraries: not as utopias exempt from the inequality and violence in our country, but as real places that too often bear the brunt of them. Both a deeply personal cry of frustration and a boldly argued rallying cry, this book will change the way you think about libraries. It will, in all the best ways, make you want to fight: not just for more equitable libraries, but for a more equitable world." —Claire Comstock-Gay, author of Madame Clairvoyant's Guide to the Stars

“One part love letter, one part eulogy, Overdue tells the story of America’s public library system through the eyes of a young, idealistic librarian who has experienced both the best and worst of it. Amanda Oliver proves herself a vibrant new literary voice as she weaves her own deeply personal account with an unblinking look what the library was meant to be, and what it has become. This is a book for all book lovers.” —Reza Aslan, author of Zealot: The Life and Times of Jesus of Nazareth

"Overdue is a work of not only rigorous research but also enormous empathy as it attempts to reckon with our country's many failures and how they manifest themselves in our public library system. It should be required reading for those of us who love to read." —Zan Romanoff, author of Look

“Overdue by Amanda Oliver is a crucial, incisive, heartening look at our society through the triumphs and pitfalls of our public library system. This book is required reading for everyone who remembers their first trip to these community centers fondly and wants that experience for future generations.” —Akilah Hughes, author of Obviously: Stories from My Timeline

"Overdue sheds light on some of our country's most literary and sacred spaces. In this powerful, thoughtful, and deeply compelling debut, Amanda Oliver shows us what libraries are for, what they cannot do, and how belonging can look so many different ways. For anyone who has ever delighted in the cool hush of the stacks of a library, this book is for you." —Emily Rapp Black, author of The Still Point of the Turning World

"As a writer saved, like so many others, by the public library in my hometown, I was fascinated by Amanda Oliver's tender, truthful, wide-ranging, and deeply personal memoir about life in American libraries, and her honesty about the centers and edges of American life right now. It's a testament to the written word and saving graces."—Susan Straight, author of Between Heaven and Here

"At once a love letter and a call to action, Overdue dispels mythology and demands a better future. You’ll never see libraries the same way again." — Esquire Online

"A thought-provoking read for those in and out of the library." — Booklist

"Overdue is not an easy book to read for those of us who love or have romanticized libraries. It requires readers to confront the ways that America and its public institutions are failing low-income communities nationwide—but that’s exactly why it’s essential to read." — BookPage