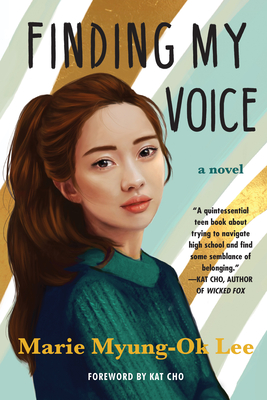 
Not On Our Shelves—Ships in 1-5 Days
The groundbreaking Own Voices YA classic from Korean-American author Marie Myung-Ok Lee, reissued with a new foreword from Wicked Fox author Kat Cho.

Seventeen-year-old Ellen Sung just wants to be like everyone else at her all-white school. But hers is the only Korean American family in town, and her classmates in Arkin, Minnesota, will never let her forget that she’s different. At the start of senior year, Ellen finds herself falling for Tomper Sandel, a football player who is popular and blond and undeniably cute . . . and to her surprise, he falls for her, too. Now Ellen has a chance at a life she never imagined, one that defies the expectations of both her core friend group and her strict parents. But even as she stands up to racism at school and disapproval at home, all while pursuing a romance with Tomper, Ellen discovers that her greatest challenge is one she never expected: finding the courage to speak up and raise her voice.
Marie Myung-Ok Lee is the author of two other YA novels: Necessary Roughness and Saying Goodbye, the sequel to Finding My Voice, as well as the middle grade novels If It Hadn’t Been for Yoon Jun and Night of the Chupacabras. Her books have won multiple awards, including Friends of American Writers, New York Public Library’s Best Books for the Teen Age, and NCTE’s Children’s Choice. She has been a judge for the National Book Awards, a Fulbright Fellow, and was one of the first Korean American journalists allowed into North Korea.
Praise for Finding My Voice

“A quintessential teen book about trying to navigate high school and find some semblance of belonging . . . I am so happy that Finding My Voice is finding new life for a whole new generation of readers.”
—Kat Cho, author of Wicked Fox (from the Foreword)

“A staple that deserves permanent space on your bookshelf.”
—Bitch Media

“Honestly rendered, and never didactic, the story allows readers first to flinch in recognition and then to look into their own hearts.”
—Kirkus Reviews, Starred Review

Praise for Marie Myung-Ok Lee
“That rare book, that rare page-turner, the one you cannot put down, the one you will suspend washing the laundry for or cooking breakfast for. It is the novel you will open and read in one urgent breath as you take in the storyteller’s compelling tale of lives felt long after the book’s end as you turn off the light to sleep.”
—Lois-Ann Yamanaka, author of Wild Meat and the Bully Burgers