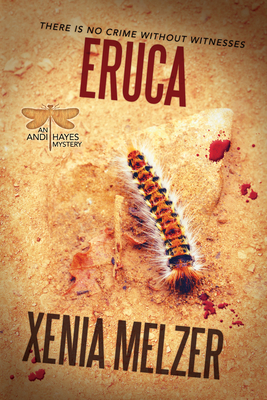 This is book number 2 in the Arthropoda series.

There is no crime without witnesses

When Detective George Donovan and his eccentric partner, Detective Andi Hayes, need a break from their gruesome job, a hike seems like just the thing.

Unfortunately, the job catches up with them when they find three dead men in a lake.

When the promising clues dry up, George and Andi turn once more to Andi’s “gift”—but this time things aren’t so easy. Andi’s mysterious talents are growing stronger, making it harder to block out the barrage of information and taking a toll on his physical and mental health. The cryptic clues his informants offer are even more bizarre than the case itself. And the more they discover about the victims, the more uncomfortable the investigation becomes.

Torn between catching a killer and serving justice, between George’s career and Andi’s sanity, the detectives have their work cut out for them if they’re going to solve these murders.
Xenia Melzer grew up and still lives in rural Bavaria, where not much of anything happens – an escaped cow or some lost tourists now and then, nothing truly mysterious or even scandalous. For that reason, trying her hand in some mystery of her own seemed like a good idea. Xenia has also recently discovered she’s demisexual with a dash of asexuality thrown into the mix, which opened her eyes to a lot of things and gave Andi and George, the two main characters in the Andi Hayes Mystery series, their special spin. In addition, a fascination with insects of all kinds provided her with the real detectives for the story. Xenia loves NCIS, snuggling with either her husband or her horse – the children don’t keep still long enough – and crocheting, the latter a newly discovered hobby.