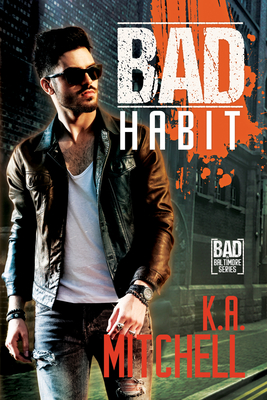 This is book number 6 in the Bad in Baltimore series.

Life is always looking for ways to screw you over. Scott McDermott survived the foster care system and knows better than to let anyone close, but Liam Walsh is his one vulnerability.

Twice Scott let down his guard, and twice Liam vanished from Scott’s life.

So when Scott comes face-to-face with Liam for the first time in six years, he punches Liam in the nose. Only after Scott’s friend—and Baltimore County police officer—Jamie reads him the riot act does Scott discover that in the intervening years Liam has been to war and lost his leg.

Liam hasn’t had the easiest life either. He took care of his drug-addicted mom when she was unable to take care of herself. He’s fallen in love with Scott twice, but when Liam saw Scott going down the same path as his mother, he left. The lesson that he can’t save everyone has been a painful one for Liam to learn. Maybe what he and Scott had can’t ever be fixed.

Scott and Liam have never fallen out of love—which becomes obvious when they start working together—but what will make this time any different from all the others? Will the third time really be a charm?

K.A. Mitchell discovered the magic of writing at an early age when she learned that a carefully crayoned note of apology sent to the kitchen in a toy truck would earn her a reprieve from banishment to her room. Her career as a spin-control artist was cut short when her family moved to a two-story house and her trucks would not roll safely down the stairs. Around the same time, she decided that Ken and G.I. Joe made a much cuter couple than Ken and Barbie and was perplexed when invitations to play Barbie dropped off. She never stopped making stuff up, though, and was thrilled to find out that people would pay her to do it. Although the men in her stories usually carry more emotional baggage than even LAX can lose in a year, she guarantees they always find their sexy way to a happy ending. K.A. loves to hear from her readers. You can email her at ka@kamitchell.com. She is often found talking about her imaginary friends on Twitter @ka_mitchell. Email: ka@kamitchell.com Twitter: @ka_mitchell Website: www.kamitchell.com Blog: authorkamitchell.wordpress.com Tumblr: kamitchellplotbunnyfarm.tumblr.com